She scored her first Oscar nomination for Best Achievement in Costume Designs for Pride & Prejudice movie and was nominated for two more including a win for AK.

Here are some images (I've compiled here) for P&P (2005) costumes (images via Pemberley State of Mind on tumblr and P&P costumes display via Austen Only and Let's Dream A Dream) below... 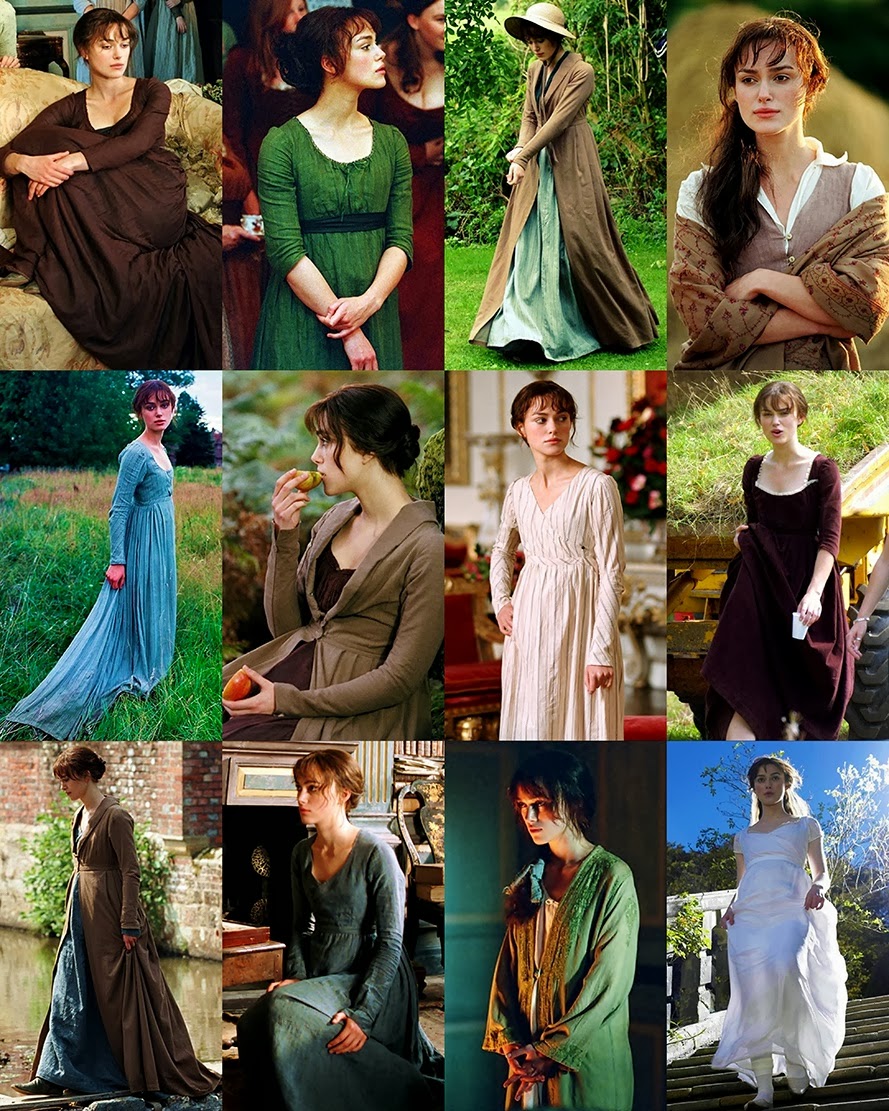 "Joe [Wright] wanted Lizzie's character to be tomboyish, to be clever, to be bright, to not be very interested in current fashions, to be interested and involved in nature and the things around her." (Jacqueline Durran, P&P Costume Designer; via P&P Companion Book) 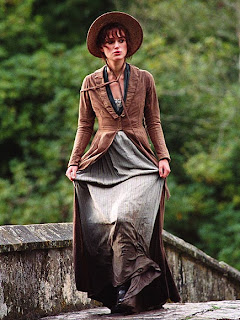 "This was a provincial family," Durran explains of Pride & Prejudice's Bennet clan (see Knightley in character at left). "I thought about how a local dressmaker would've made something, the fabrics she would've had, drawings of fashions from London, and how she would've translated that – and what a provincial family would do with their clothes."


"Keira is a fantastic collaborator. She enjoys the contribution a costume can make to a performance, and never worries about what something will look like. She never has a moment of vanity, but is always completely focused on what is best for the movie." (Jacqueline Durran) 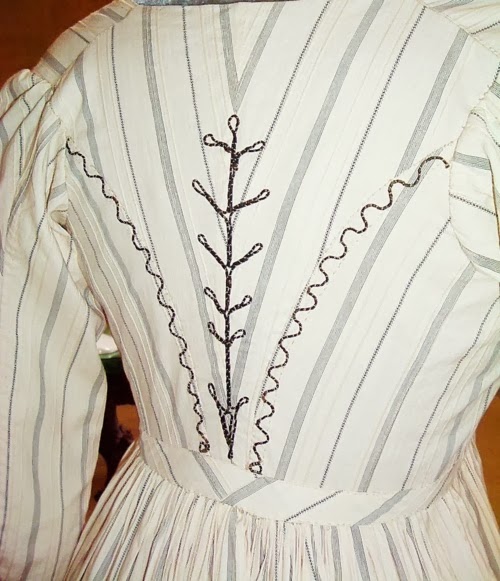 "I love working with Jacqueline Durran. She is the costume designer who also designed that green dress in “Atonement” and all the costumes as well for “Pride and prejudice”, that I did. She is one of my favorite costumes designer definitely, but just creative people. I think the reason is that there's always a really specific reason for each costume and they really tell the story." (Keira Knightley)

via Indie London's Keira Knightley P&P Interview:
Q. You seem to have made a habit out of taking roles with corsets. How were the ones in Pride and Prejudice for you?
Keira Knightley: These corsets were fine. For me what was really important was that you got a sense that these girls could really run around in a field, walk for miles, do anything they wanted in their clothes. The corsets in Pride & Prejudice only came down so far, whereas the corsets for something like Pirates of the Caribbean are right the way down, which means your stomach is pulled in and you really can’t breathe. With these it was like not wearing a corset at all. It was fantastic. So a very easy corset experience for me. 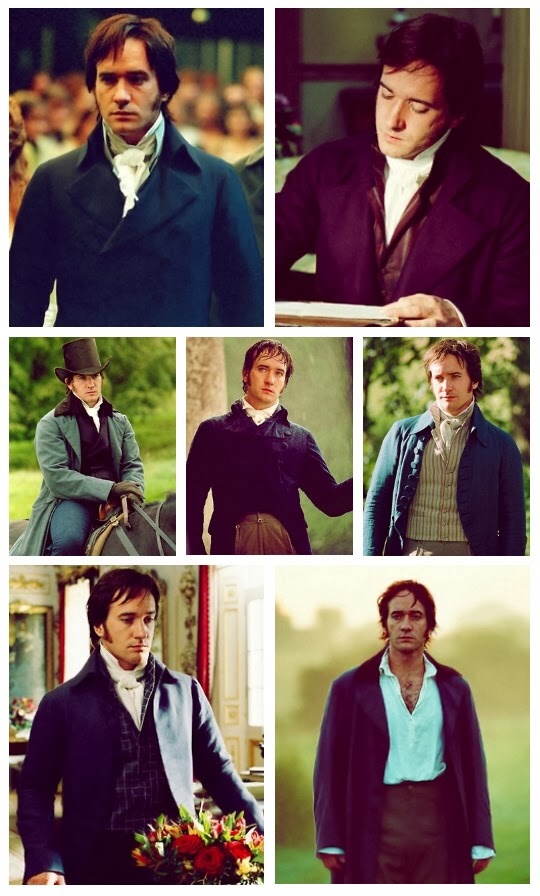 "Costumes are also used to show Mr. Darcy’s evolution as he comes to love Elizabeth Bennet and let go of his snobbery. His costume had a series of stages. The first time we see him he’s at Meryton, where he has a very stiffly tailored jacket on, and he’s quite contained and rigid. He stays in that rigid form for the first part of the film. By the time we get to the proposal that goes wrong in the rain, we move to a similar cut, but a much softer fabric. And then later he’s got a completely different cut of coat, not interlined, and he wears it undone. The nth degree is him walking through the mist in the morning, completely undressed by 18th-century standards. It’s absolutely unlikely, but then Lizzie’s in her nightie, so what can you say?” (Jacqueline Durran, P&P Costume designer; via P&P Companion Book/The Telegraph Interview) 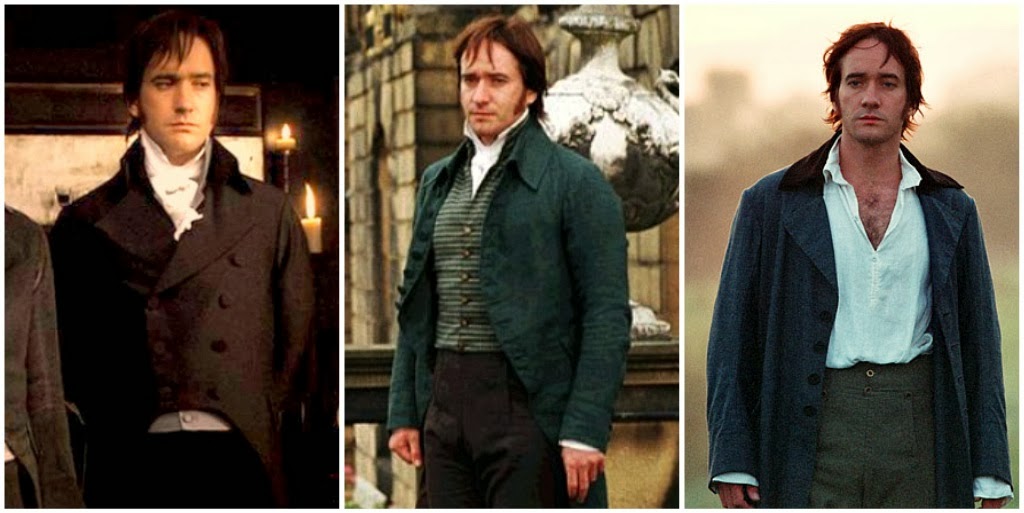 “If you see closely Darcy costumes in the course of the film change quite radically. In the early scenes he´s wearing a very buttoned up, very rigid, very stiff style of costume. In the middle stage, he´s wearing the same style but in a softer fabric and a softer cut and, by the end of the film, he´s wearing a much looser cut, an open jacket, a more country style, less uptight, less rigid. His costumes reflect the other changes in his character.” (Jacqeline Durran, Costume designer; via P&P Companion Book)

"The costumes are great because they kind of tell you how to move, how to walk. You can’t sit in britches like I’m sitting in now, for instance. [Well you could, but it would be quite uncomfortable]. And being in the locations themselves is great, it’s less of a leap of the imagination if you’re standing on the balcony at Chatsworth than if you’re in an aircraft hangar somewhere." (Matthew Macfadyen via Indie London) 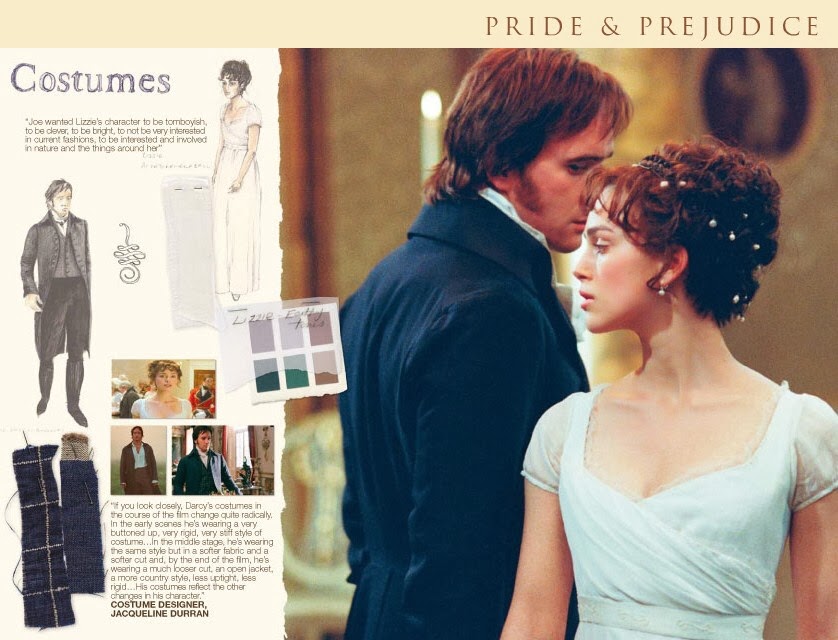 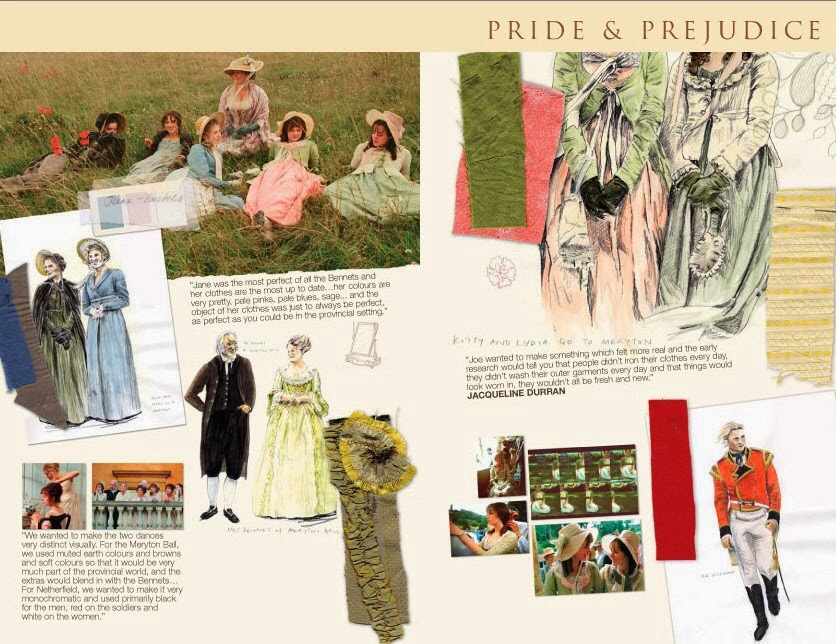 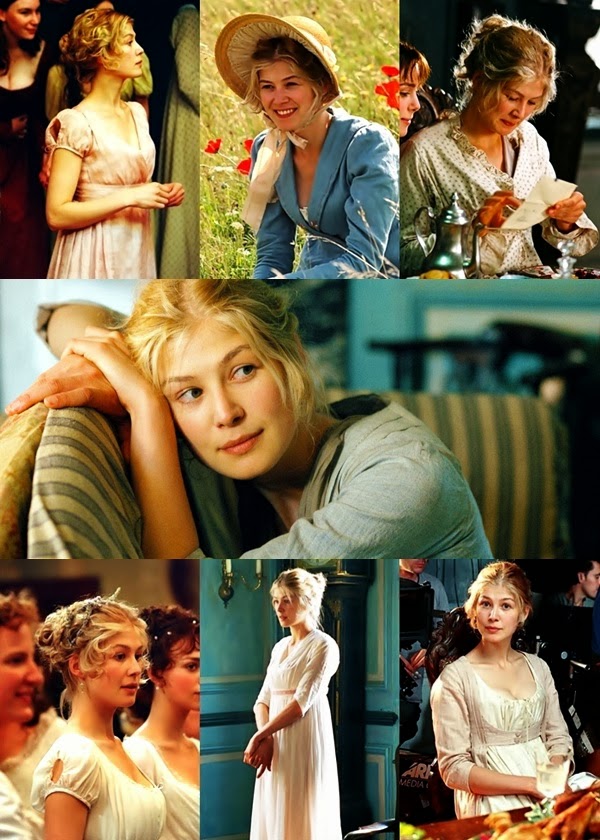 “Jane is the most perfect of all the Bennets and her clothes are the most up to date. Her colours are very pretty, pale pinks, pale blues, sage…and the object of her clothes was just to be always perfect, as perfect as you could be in a provincial setting. Jane was the most refined and yet it’s still all a bit slapdash and homemade, because the Bennets have no money. One of the main things Joe wanted was for the whole thing to have a provincial feel.” (Jacqueline Durran, P&P Costume designer; via P&P Companion Book) 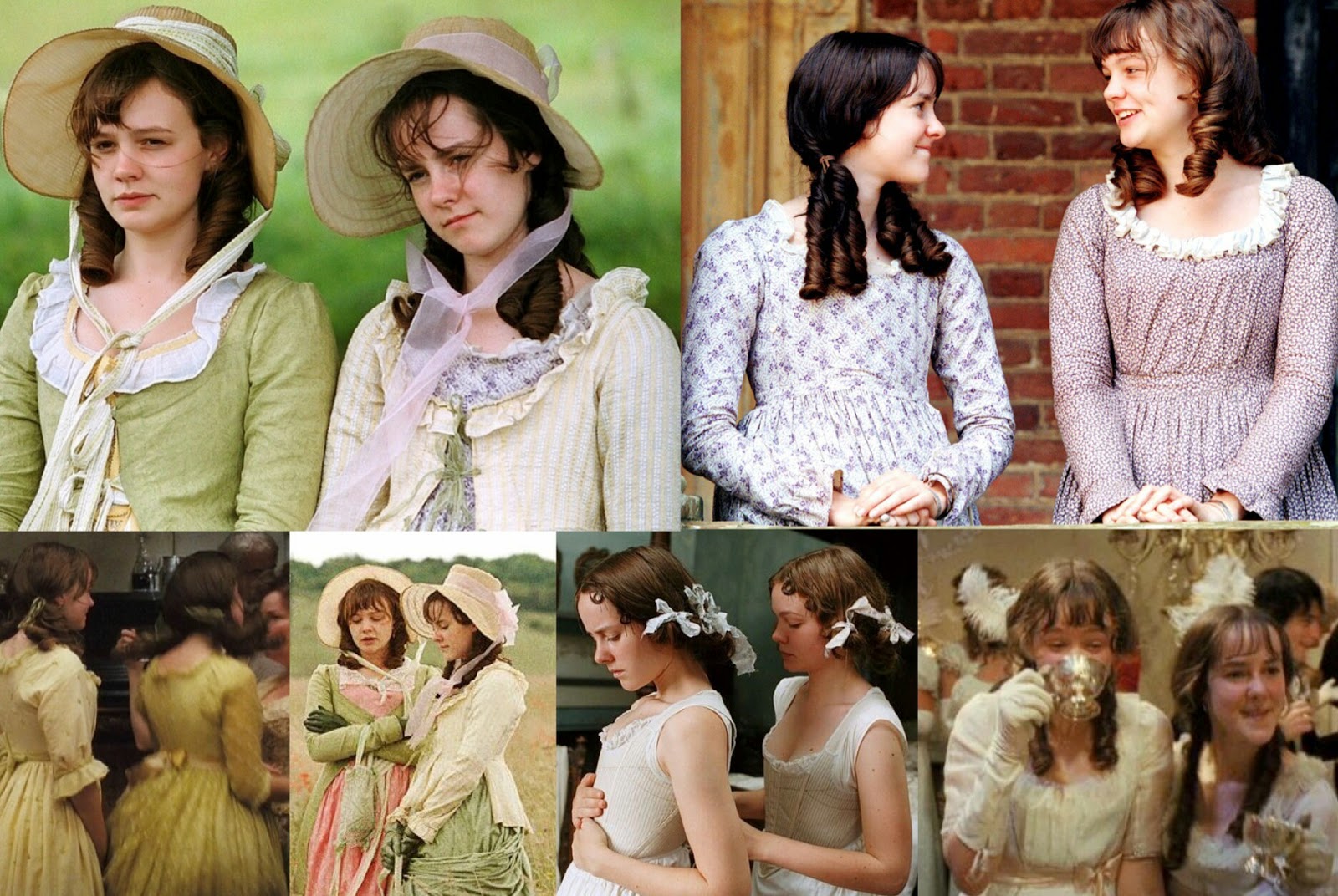 "Lydia and Kitty are a bit Tweedledum and Tweedledee in a kind of teenage way. I tried to make it so that they’d be sort of mirror images. If one’s wearing a green dress, the other will wear a green jacket; so you always have a visual asymmetry between the two.” (Jacqueline Durran, P&P Costume designer; via P&P Companion Book) 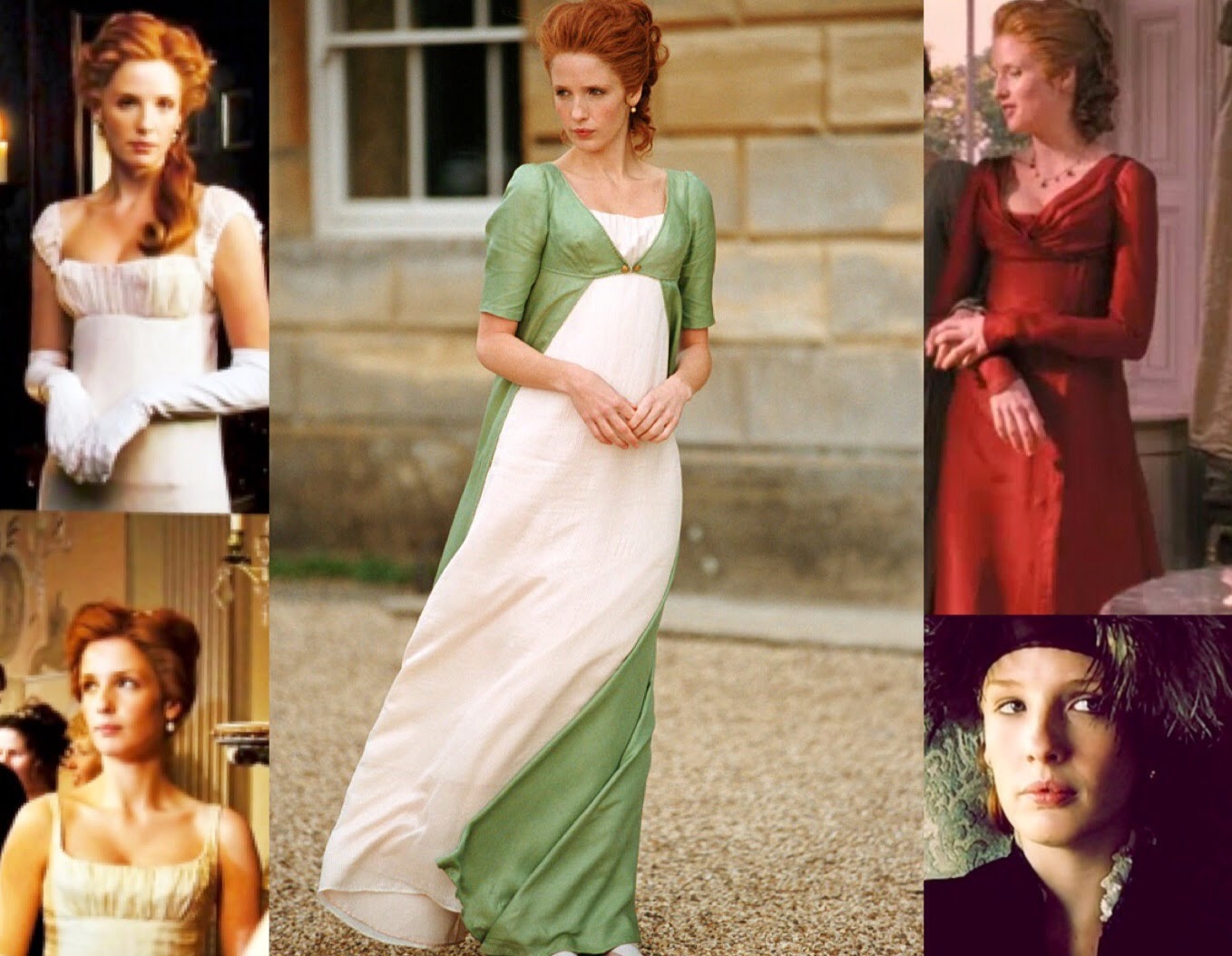 The Empire Lines were just coming in, so high society such as Caroline Bingley, would be wearing an Empire Line dress... (Joe Wright) 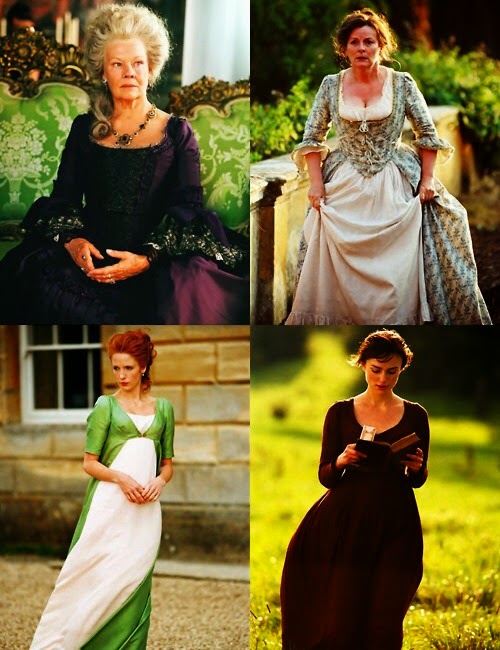 “I find empire line dresses are very ugly, so I did some research. Although the novel was published in 1813, Jane Austen wrote her first draft of “Pride and Prejudice”, then called “First Impressions”, around 1797. So we used the fashions of the earlier period, where the waist on dresses was lower and more flattering. When Caroline Bingley appears, she would obviously be wearing the latest creation. But Mrs. Bennet’s dresses are earlier than 1797, and Lady Catherine’s are even earlier, because those two would have best clothes from previous years in their wardrobe.” (Joe Wright; via P&P Companion Book) 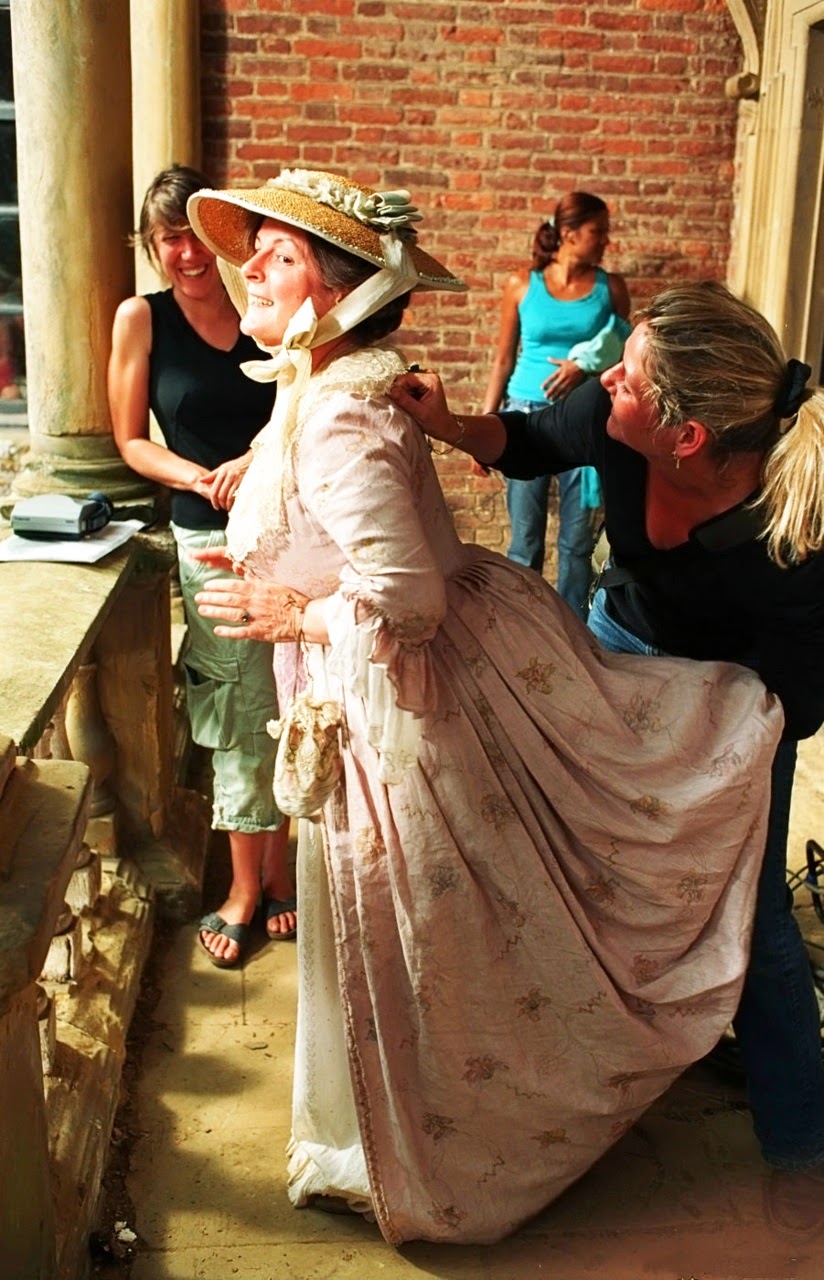 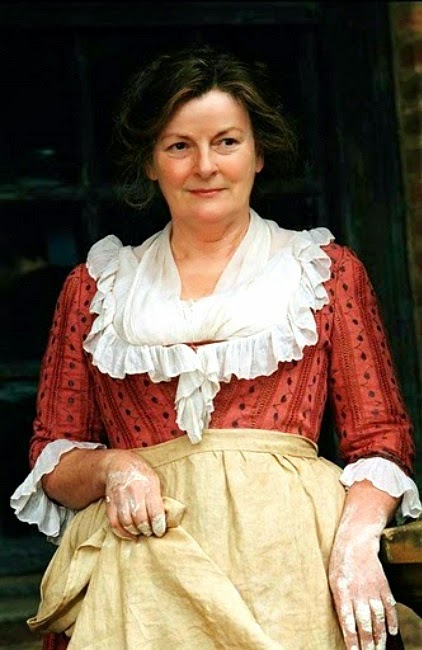 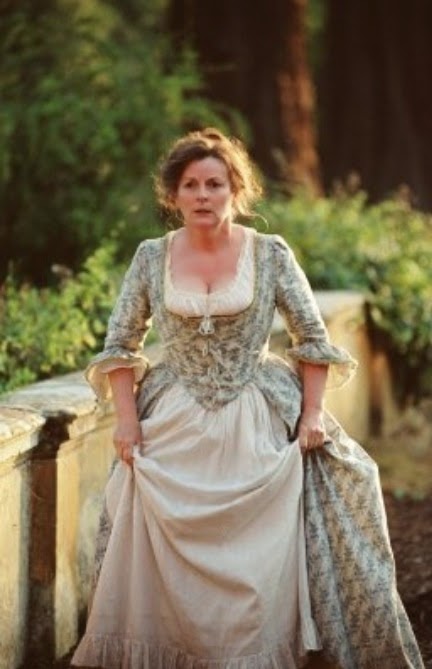 "They were so beautifully made, the costumes all together were handmade, as they would have been by Sands in Rotherhithe. Ridiculously, beautifully made. And mine, because the design was from an earlier period, even had repairs in it to make it really, really authentic, with pieces of fabric that the girls would have had. It was beautifully made.” (Brenda Blethyn) 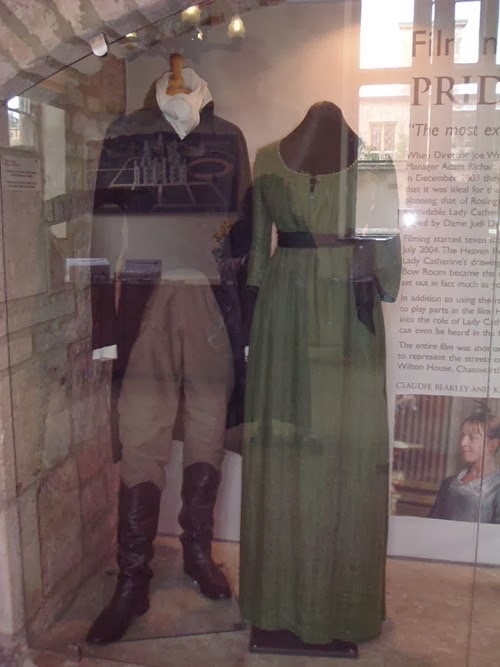 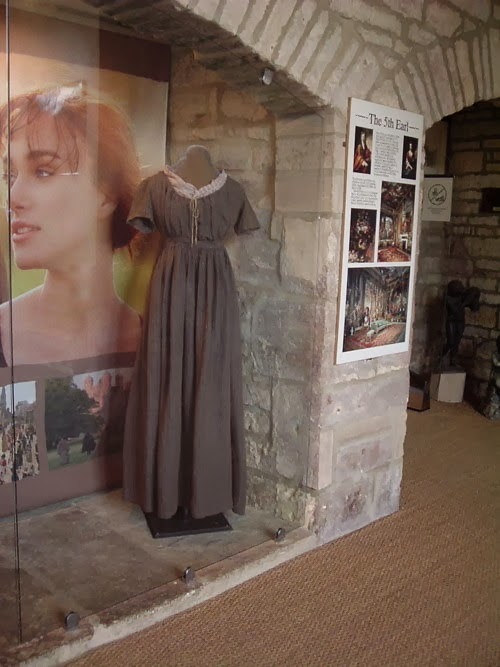 Jane Austen’s Film and TV adaptation locations: Burghley Park and Some Costumes from Pride and Prejudice 2005 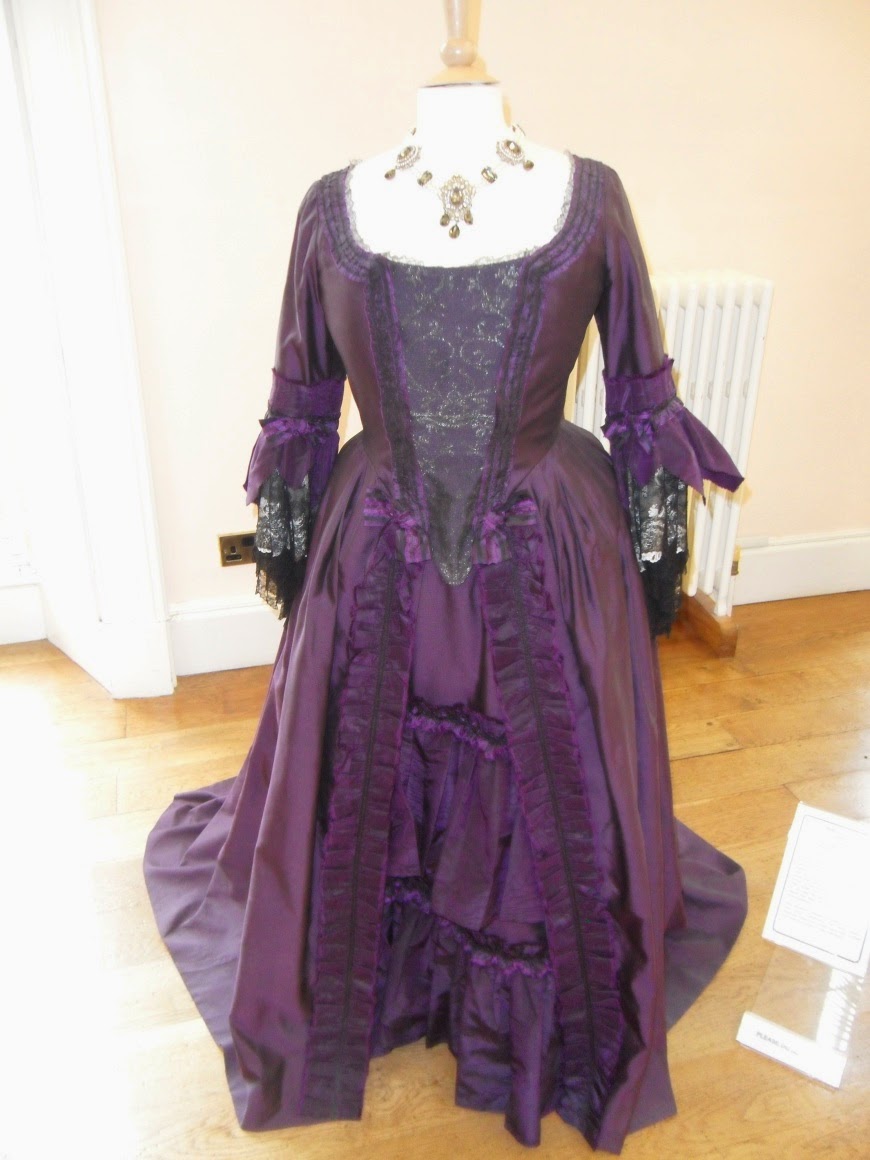