Jena is in the article titled, "Confessions D'une American Girl" (Confessions of an American Girl). You can read her interview starting at page 100-111 @ dirrtyglam.com (Sorry, I'm not familiar with the language if it's French or Spanish, so I couldn't translate the article for you, lol).


Check out some glamorous images of Jena Malone from the magazine below:


Dench was nominated for Best Actress (her 12thBAFTA TV Nominations) in "Cranford," the five-hour BBC miniseries about life in a English village in the 1840s. Cranford led with seven nods including Dench, co-starEileen Atkins (for Best Actress as well, who won this award over JD) and screenwriter Heide Thomas.


Check out pics of Judi Dench at the Red Carpet Arrival:

"Tower," from CBS Par, revolves around a group of Chicago reporters who treat breaking news as cases to be investigated and solved. The British-born Pike ("Pride & Prejudice") will play the paper's political reporter. Oscar winner Harden, most recently seen in "Into the Wild," will play its new owner. Harden is repped by CAA and Framework."Flashpoint," a co-production of CBS Par and Canada's CTV, centers on an elite tactical police team.
Post a Comment
Continue Reading »

The Edge Of Love To Open @ Edinburgh Film Festival

According to KeiraWeb, The Edge Of Love will open the Edinburgh International Film Festival on June 18th, Variety announced yesterday, adding that Keira is expected to attend.

It also says the June 20thUK release will be London only, with nationwide release on the 27th.

Also, check out more new stills from The Edge Of Love below taken from KeiraDaily...

In addition, there's another positive screening review of TEOLhere. 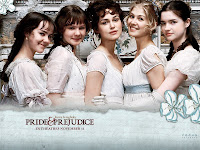 Ever thought about Keira Knightley and Winona Ryder as the same person (that you mistake them in their movies?) or looking eerie similar at least look-wise? I'm sure some of you have seen some of their many pictures on magazines and movies that you can't help but noticed they look so similar (we can even add Natalie Portman here, but these two look far more similar, lol). If so, you'll see or rather noticed a lot of similarities between these two beautiful and talented actresses. Take for instance, Keira as Elizabeth Bennet in Pride & Prejudice and Winona Ryder as Josephine March in Little Women, both period movies and both earned them Oscar Nominations for Best actress (in their early 20s too). Here's a comparison between the two of them, I first posted this a while back at the P&P forum (as I own both movies on DVD), I found some very interesting similarities not only with actresses Keira Knightley and Winona Rider eerie physical resemblance (their poses, fac…
4 comments
Continue Reading » 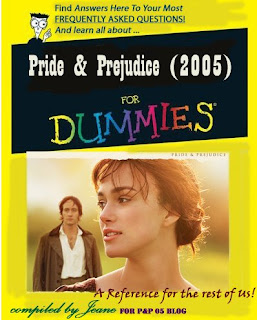 The first 35 were already posted about a month ago. 5 More FAQ with Q&A are posted here.

READ on! All you ever wanted to know about the 2005Oscar Nominated film, Pride & Prejudice (the cast, characters, and more!) ...

Hollywood Reporter reports that Rosamund Pike along with Ving Rhames and Radha Mitchell have joined Bruce Willis in the sci-fi thriller "The Surrogates" for Disney.

Jonathan Mostow is directing the film based on the graphic novel by Robert Venditti and artist Brett Weldele of Top Shelf Comix. Michael Ferris and John Brancato -- the writing duo that last teamed with Mostow on "Terminator 3: Rise of the Machines" -- penned the script. Mandeville Film's David Hoberman and Todd Lieberman are producing along with Max Handelman and Elizabeth Banks.

Rosamund Pike plays Bruce Willis' character's wife. Production is set to begin in late April on the film, which will be released through Touchstone.

Pike just wrapped production on "An Education" and will appear in the upcoming "Fugitive Pieces." Read full article here.

Judi Dench And Nicole Kidman In Talks For "Nine"

According to EW.com (taken from Hollywood Reporter), Nicole Kidman and Judi Dench are in talks for Rob Marshall's film adaptation of the Tony-winning Broadway musical Nine. They would join Javier Bardem, Penelope Cruz, Marion Cotillard, and Sophia Loren in the movie based on the 1982 stage production, which was inspired by Federico Fellini's autobiographical film 8 1/2.

The story is about a film director (Bardem), suffering a creative block as he juggles the numerous women in his life. The Weinstein Co. project was supposed to start production in March but the start date has been pushed back to September. Kidman is due to have a baby over the summer, and the hope is she'll have enough maternity leave before that start date. Kidman has previously shown her skills as a singer and dancer in Moulin Rouge, and Dench played Sally Bowles in the original London production of the musical Cabaret in 1968. She also won the Oliver Award for best actress in a musical in 1995 for h…
1 comment
Continue Reading » 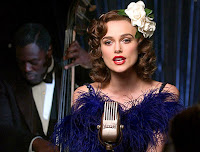 Keira Knightley got a glowing review from an early press screening in London of one of her upcoming 2008 films, The Edge Of Love.

Here's part of the review:

"What makes it interesting is mainly it's lush visuals. The cinematography is by far and away the star of the show. In some scenes the shots rival Atonement for WWII period lushness (well almost, anyway). And I think it is fair to say this is a film in love with it's main star Keira Knightley. Every shot is crafted to show her off to perfection, and her beauty is perhaps even more on show here than it was in Atonement. The opening shot, in bright technicolour, pans outwards from her face, and it is truly mesmerising. Knightley backs up her superficial attributes with a stellar performance, outacting both male leads (Cillian Murphy and Matthew Rhys) quite comfortably."


The Edge Of Love will be in theaters sometime later this year.
Post a Comment
Continue Reading » 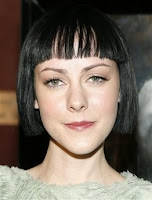 Jena Malone was in attendance at a screening of her new film, ' The Ruins' in Los Angeles on Wednesday, April 2, 2008.

Check out some new photos of Jena from the premiere below:

What do you all think of Jena's new shorter, dark-haired (with bangs) do? I thought she looked like actress Christina Ricci (who had the same do in Adams Family movies, lol). Her P&P co-star Keira Knightley almost had the same hair do at last year's LA premiere of her Oscar Nominated film, Atonement.

Kelly Reilly Joined The Cast Of 'Me And Orson Welles'

According to IMDB, Kelly Reilly (aka P&P's Caroline Bingley) has a new project line-up for 2009. She is to star alongside Ben Chaplin, Claire Danes, and Zac Efron in a new film called 'Me And Orson Welles' as Muriel Brassler.


Filming is underway and the film, directed by Richard Linklater, is due to be released some time next year.

The Ruins In Theaters Today!

If you're a Jena Malone fan and you dig a suspense/horror/thriller type of films, go see The Ruins today!

P&P co-stars Rosamund Pike (Jane Bennet) and Carey Mulligan (Kitty Bennet) will reunite in a new film, "An Education," which is currently filming.


You can read more info of "An Education" here.

Jena Malone is currently featured in AllureMagazine's April 2008 issue (with singer Mariah Carey on the cover to your left) in the Beauty Reporter section.

Check out a scan of Jena's Allure interview below (which I scanned and transcribed here for JM fans to read).

Click the scan to enlarge and read JM's interview!

Since her debut in Bastard Out of Carolina at age 12, Jena Malone has carefully navigated that treacherous path from precocious child to adult actress. After she sent him an audition tape, Sean Penn chose her to narrate and appear in Into The Wild. This month, she stars in The Ruins, a horror movie about young American tourists who encounter some "really crazy plants" in a Mexican jungle.


What's the premise of The Ruins? It's Lord of the Flies meets Rosemary's Baby, in a way. The killer is human nature.

One set photo shows you in a posttage-stamp-size bikini.We went through 50 bikinis to find one that looked good.

Check out several new snapshots of Matthew Macfadyen filming "A Pocket Full of Rye", and ITV offering of the Miss Marple series. Click the Capital Pictures here to view the pictures!


Also, in other MM related news...


According to Matthew Macfadyen News fansite, The official release date of Frost/Nixon has been set by Universal Pictures as December 5, 2008, just in time for awards season! See the link from Universal Pictures.
1 comment
Continue Reading »
More posts