Keira Knightley attended tonight's BIFA (British Independent Film Awards). As previously posted here a month ago, Keira Knightley and Kelly Reily Nominated for 2008 British Independent Film Awards, but unfortunately, neither one of them won for Best Actress category. They both lost to Vera Farmiga for The Boy in the Striped Pyjamas (co-star of Keira's boyfriend and fellow P&P co-star Rupert Friend). The Duchess did not win either in its 3 other nominated categories (Best Supporting Actor and Actress, Best Costume). Kelly Reilly was not in attendance as there were no pictures or reports of her attendance there. She was probably busy filming one of her upcoming films, Sherlock Holmes, which has already started production and filming.


Anyways, check out new pics of Keira @ BIFA below!

Quick update coming your way for Guy Ritchie's Sherlock Holmes fromcanmag.com (and Kelly Reilly's IMDB profile newsdesk). While we were expecting the film to arrive in 2010, Warner Bros. has confirmed that we won't have to wait as long.

Robert Downey Jr. brings the legendary detective to life as he has never been portrayed before. Jude Law stars as Holmes. trusted colleague, Watson, a doctor and war veteran who is a formidable ally for Sherlock Holmes. Rachel McAdams stars as Irene Adler, the only woman ever to have bested Holmes and who has maintained a tempestuous relationship with the detective. Mark Strong stars as their mysterious new adversary, Blackwood. Kelly Reilly will play Watson's love interest, Mary.
Speaking of Sherlock Holmes...check out the following link:
New pics from Sherlock H…
Post a Comment
Continue Reading »

Hollywood Reporter recently reported that Jena Malone and Cam Gigandet (Twilight) were cast to star in Five Star Day, which is currently filming at this time.


The film is a journey of self-discovery about a guy (Gigandet) who loses everything and must come to terms with what's most important in life. Malone is playing his girlfriend.


Also in the cast is Will Yun Lee ("Bionic Woman"), who plays Samuel, the smart best friend and voice of reason to Gigandet's character.

Buday is a recent AFI grad whose thesis film won several awards on the festival circuit.


Persona: Benson goes into hiding to find justice for an abused housewife, which in turn uncovers an unsolved 34-year-old murder case. (TV-14)

According to DVD Times UK, Paramount Home Entertainment have announced the Region 1 DVD release of The Duchess on Sunday 28th December 2008 priced at $29.99 SRP.

A young noblewoman marries into one of Britain’s most powerful families and becomes the toast of London in the true story of the Duchess of Devonshire and “Empress of Fashion” who must face an agonizing choice between responsibility and love. This period drama stars Keira Knightley, Ralph Fiennes and Dominic Cooper.

Paramount has set a late-December Blu-ray date with 'The Duchess.'
The Keira Knightley-Ralph Fiennes period drama, which grossed over $25 million at the domestic box office, will arrive on Blu-ray December 27 (day-and-date with the standard DVD).

Out & About: Keira Knightley and mother spotted in New York City 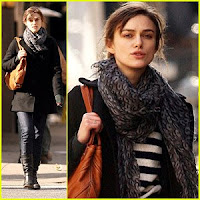 Just Jared has new candid pics of Keira Knightley looking stylish as she was spotted with her mother Sharman Macdonald walking in the Soho district of New York City on Monday.

The 23-year-old actress is currently in NYC filming Last Night, with Eva Mendes and Sam Worthington.

The story follows a married couple (Worthington and Knightley), apart for a night while the husband takes a business trip with a colleague to whom he’s attracted (Mendes). While he’s resisting temptation, his wife encounters her past love.

Check out pics of Keira and her Mom below:

Matthew Macfadyen attends the premiere of his upcoming film, "Frost/Nixon" at the Ziegfeld Theater on November 17, 2008 in New York City.

Frost/Nixon will be in limited U.S. theatrical release on December 5th.

The Sun and various other news entertainment sites have reported that...

The Brit legend, who won an Oscar for her role in Shakespeare in Love, has played 007's boss for over a decade.

But despite being referred to as the “real Bond girl”, co-producer BARBARA BROCCOLLI has revealed silver-haired Judi is contemplating waving goodbye.

Barbara told Comingsoon.net: “She is our anchor. She is the anchor of the film in terms of the character. She is the only authoritative figure in Bond's life.

Judi first took on the role of M in 1995, opposite PIERCE BROSNAN in GoldenEye. She has since starred in eight secret agent flicks, including The World Is Not Enough and 2006's Casino Royale.

Dame Judi Dench, co-star of the current Box Office #1 hit, Quantum of Solace attended one of the European premieres for the film last October.

Check out a couple pics below, as well as the press conference pics of Ms. Dench and QofS cast from as far back as Jan. of this year, and her stills as "M" from the movie.

Daniel Craig, Dame Judi Dench and Marc Forster (in the first pic) as well as the cast (in 2nd and 3rd pics below) at today’s Quantum of Solace press conference in Pinewood Studios in Buckinghamshire, Britain (back in Jan. 24, 2008)

Great news for DameJudy Denchand her Bond film co-stars...the new Bond film, Quantum of Solace (sequel to 2006's Casino Royale) made a big debut to the top of this past weekend's Box Office with a new 007 record.

Read this article from ET Online:

The new James Bond film 'Quantum of Solace' took the box office by storm this weekend with projected sales of $70.4 million -- and broke a 007 record! Sony's latest action-packed offering easily set a new opening record for James Bond films in North America, beating the 2002 opening of 'Die Another Day,' which made $47.1 million. The last 007 film released was 'Casino Royale' in 2006, which opened to $40.8 million. 'Quantum of Solace,' starring Daniel Craig, Olga Kurylenko and Judi Dench, takes James Bond on a global mission to stop an environmentalist from taking control of a country's water supply. The film opened outside of North America two weeks ago and has so far made $251.6 million in 73 co…
Post a Comment
Continue Reading »

Keira Knightley and The Duchess Nominated for People's Choice Awards


Here are the other nominees on the categories, which Keira and The Duchess will compete against for The People's Choice Awards.

The Hollywood Reporter reports that Rosamund Pike is in a new film with a large ensemble cast including one of my favorite actresses Shannen Doherty. How cool! Hope they'll meet and have some scenes together in this film...