An article from Parade Magazine:

It was love in the library for Keira Knightley as she and co-star James McAvoy shared a moment of passion amongst the books in their new film, Atonement. Keira tried to have a sense of humor revealing, "I think you have to turn sex scenes into a bit of a joke, which James and I did."

I found out that director Joe Wright stepped in to coach the pair. "You won't hear it in the film, but Joe was off-camera shouting instructions about what we should do to each other," Keira says with a laugh.

Wright insists he had no choice. "On the first take, they kind of went at it for 10 seconds and it was over," he remembers. "That's when I started doing the play-by-play. I've done it before with actors because they can get a little uptight getting romantic in front of a camera. I can't say I blame them."

Becoming Jane DVD out in February 2008

Availability: This title will be released on February 12, 2008. Pre-order now! This item will arrive after December 24. For delivery after the 24th, we recommend FREE Super Saver Shipping on orders over $25. Read more about holiday shipping. Ships from and sold by Amazon.com. Gift-wrap available.


It'll be available on the same day on video, dvd, and Blu-Ray...

Keira Knightley is The Duchess 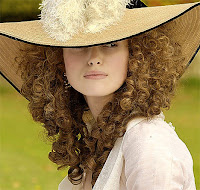 An article and The Duchess' stills from the Daily Mail:

Trouble in paradise: Keira Knightley as Georgiana on the set of The Duchess

Keira Knightley sipped a mug of builder's tea and told me all about a menage a trois she's currently involved in.

The Academy Award-nominated actress was caught up in the hankypanky as part of her portrayal of 18th-century British beauty Lady Georgiana Spencer, who became the Fifth Duchess of Devonshire.

Lady Georgiana was the celebrity star of her day. And the savage satirical caricatures of her were just as intrusive as the paparazzi who stalk Keira today.

Fine dining: Keira is a picture of old world glamour

As far as society was concerned, her marriage at 17 to William, the Fifth Duke of Devonshire, was a splendid alliance. They were seen as prime movers in the Whig aristocracy.

The Duchess befriended Lady Elizabeth Foster, known as Bess, but Bess bedded the Duke - and never left. (The Duke and Bess, by …
Post a Comment
Continue Reading »

There's a new Atonementtrailer at Focus Features site which you can directly view hereif you have quick time. I can't wait to see this movie already!


Also, from ComingSoon.net there's a character poster of Keira Knightley to your left.


While we're on Atonement topic...

Keira Knightley on the cover of Elle Magazine (Dec 2007) 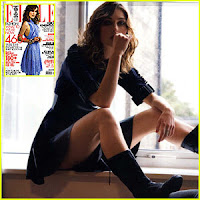 She may look for all the world like an old-school film beauty, but Keira has a spiky, anarchic streak that breaks the mold. In Atonement, she gets to have it both ways. Here are some snippets from Keira’s Elle interview:

On being moody: “I’m a moody bastard. Actually, I’ve been banned from reading newspapers because the way they’re written angers me so much. If I want an opinion, I’ll read the opinion part of the newspaper. I do not want it when I’m trying to get the facts. I get incredibly angry. It really f—ks me off. See, I have to calm down about it.”

On her sex scene in upcoming movie, “Atonement”: “There was no knob-touching, for…
Post a Comment
Continue Reading »

Best Performance by an Actress in a
British Independent Film

Anne Hathaway for Becoming Jane
Tannishtha Chatterjee for Brick Lane
Sophia Myles for Hallam Foe
Kierston Wareing for It's a Free World...
Judi Dench for Notes on a Scandal (a P&P alumni)


Update (11/29/07): This was held last night and unfortunately, Anne didn't win as Judi Dench won for Notes on a Scandal. But she was at least nominated and of course, a veteran like Judi Dench no doubt wins on this one and rightly so as she was said to be great in this film. Anne's still young and has plenty of time to shine and hopefully, she'll win in other awards too, but what counts the most is that she gets recognized and phrase for her brilliant acting in Becoming Jane.

Read the rest of the winners for BIFA below:

Becoming Jane is nominated for a
People's Choice Award for ...

Hey, fellow P&P '05 fans, looks like we are getting a 2-Disc Deluxe Gift Set, which is to be released on November 13th!

Further Details:
Universal Home Video has sent over artwork for a 2-disc deluxe giftset of Pride & Prejudice which stars Keira Knightley, Matthew Macfadyen, Judi Dench, and Donald Sutherland. The set will be available to own from the 13th November. Both anamorphic widescreen, and full screen presentations will be included - along with English, French and Spanish Dolby Digital 5.1 Surround tracks. Extras will include an audio commentary with Direcor Joe Wright, a Conversations with the Cast featurette, a Jane Austen, Ahead of Her Time featurette, A Bennet Family Portrait featurette, a HBO First Look: Pride & Prejudice feature, two further featurettes on the Politics of Dating and The Stately Homes of Pride & Prejudice, Galleries of the 19th…
1 comment
Continue Reading »
More posts