Film couple Rosamund Pike and Joe Wright are engaged to be married, after the director proposed during a romantic break in Italy.

The pair stopped off at Lake Como, on their way to the Venice Film Festival, where Wright asked Pike to be his wife.

The couple met on the set of 2005 film Pride And Prejudice, which Wright directed and Pike starred in.

Wright announced the news to friends and family during a dinner in Venice. The couple were greeted with applause after the film maker said, "I have asked Roz to be my wife she, thank God, said yes."

They will marry next year, after finishing pending film projects.

Congrats and best wishes to Ros & Joe! Lovely couple. Let's hope when they get married that they invite their P&P family (esp. Matthew, Keira and the rest of the Bennet family, and P&P crew) to the wedding ceremony …
Post a Comment
Continue Reading »

How, interesting...it seems September is P&P/JA related movies month! Check out some of the P&P '05 cast whose films are going to be at the Toronto International Film Festival (2007) this year. Don't be surprise if we see a P&P cast reunion pics (at least some of them will be there). It was 2 years ago when they were last seen together at the TIFF 05 promoting P&P '05 film.

Keira Knightley at the UK Premiere of Atonement 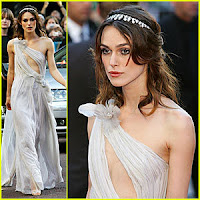 From Just Jared (the best source for celeb gossip and photos )

Keira Knightley (in Rodarte) goes for the Venetian angel look at the UK premiere of Atonement at the Odeon in Leicester Square on Tuesday in London, England. Canadian supermodel Jessica Stam wore this look on the runway.

Atonement is based on a best-selling novel by Ian McEwan, directed by Joe Wright and also stars James McAvoy.

What do you think of of Keira’s dress and headband — LOVE IT or HATE IT?


Here are some images of Keira from the premiere: