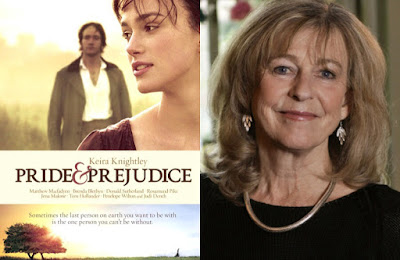 I had the pleasure in interviewing Pride & Prejudice (2005) film's own Screenwriter, Deborah Moggach, who received a BAFTA nomination (Adapted Screenplay) for scripting Jane Austen's Pride and Prejudice for the big screen, especially for our P&P 10th anniversary event and celebration here today. She is best known as the best-selling author of The Best Exotic Marigold Hotel (originally titled These Foolish Things), which was adapted into the 2011 film starring Dame Judi Dench, Dame Maggie Smith, and Penelope Wilton and recently had a movie sequel, The Second Best Exotic Mariogold Hotel. Another one of her novels, Tulip Fever has been adapted into a new movie with Judi Dench and Tom Hollander co-starring. Her newest novel, Something To Hide was recently published. You can read more about Miss Moggach and her books and other work here.

For now, read my Q&A with Deborah Moggach all about the P&P movie below... 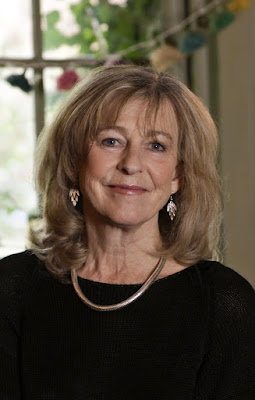 Jeane/P&P Blog: When did you first hear about Working Title Films' plan to adapt Jane Austen's classic Pride & Prejudice to the big-screen and how did you get involved with this project to write the film's screenplay for a 2-hour feature film?
Deborah Moggach: I was asked to do it because I'd just adapted Nancy Mitford's Love in the Cold Climate (2001 TV Miniseries starring P&P's own Rosamund Pike). The two writers have a lot in common - sharp social upper class satire, big eccentric families with interesting fathers and lots of daughters and animals... 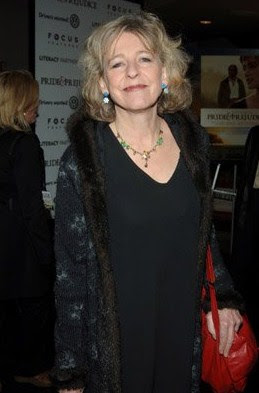 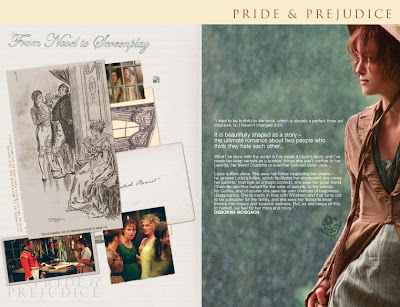 (via Pride & Prejudice film's Companion Book)
J: Movies are made to entertain, the novel is magnificent, but the movie brings the story to a wider audience who may have never read the book. Comprehending that this was an adaptation for a two hour feature film, with the realistic expectation that this would not be a book pasted on the screen; what was your process of modifying the book for this medium?
How did you decide what to include or not include, what to condense, etc.?
DM: I decided to concentrate on Elizabeth - in a film you can get into a person's head, with close-ups, and I needed to sift out any scene in which she doesn't appear - e.g. London - and people who weren't essential, e.g. the Collinses. I wanted it to be realistic, the muddy hem version, with the girls really young, no make up, same dresses every day. Not a fluffy period piece but something we could engage with, and care about. I wanted it to MATTER, that Lizzie turns down Mr. Collins, that if that family loses its house there's no net outside to catch them, they'd be thrown into real poverty - something that's difficult for us, nowadays, to understand. And I thought that the comedy should stem from this, from real pain. 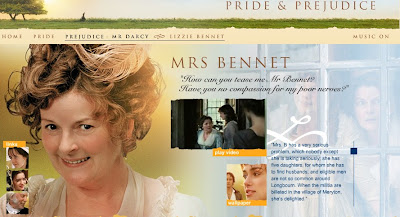 (screen capture via P&P's UK website)
J: While the essence of the book, characters, and interactions remained intact, what was the reasoning behind some of the minor changes that were seemingly made not for the sake of time? For instance, Mrs. Bennet being made to be a much more tolerable character, also the esteem of her husband, which in the book is not so favorable. Also, there was no hint that Elizabeth was her least favorite daughter. Were these your suggestions or a directive?
DM: I wanted Mrs. Bennet to be less of an airhead. She's very young, in her thirties, and not as clever as her husband but she's had little education and he loves her, though needs his own place to retire to, and also the company of his only intelligent daughter, Lizzie. But he understands that she really needs to marry off one of her girls, to save their family - or if he doesn't, WE do, and respect her for that. Having said that, she is pretty annoying and frivolous, but we always knew that. I just wanted to give her a bit more depth, and with Donald Sutherland - famously usurious and a lover of women in general - as her husband, it all made sense. And they still fancy each other!

J: There were some very good and interesting deleted scenes in your script for this movie. For instance, one of those deleted scenes was towards the end after Darcy's second proposal to Elizabeth. The part where the newly engaged couple headed back to her home at Longbourn and everyone who was looking for Lizzie was surprised, especially Mrs. Bennet, to see her enter the house together with Mr. Darcy. (See the P&P Movie Script post for this deleted scene) Do you have any favorite scenes that were left on the cutting room floor? If so, can you describe what we missed?
DM: I can't really comment on most of the dialogue as I didn't do it all, several people were involved and I can no longer remember who wrote what. All I remember is that Jane Austen's is so wonderful we didn't jettison much, we just pulled a comb through it and shortened it of course... 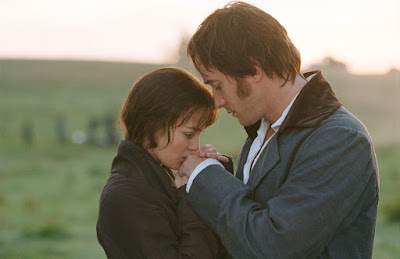 J: A lot of P&P movie fans have been wondering why Elizabeth Bennet said "your hands are cold" after Darcy asked her to marry her for the second time instead of saying the simple and typical "yes" answer. Why would she say that after Darcy just declared his love for her with "you have bewitched me body and soul. And I love, I love, I love you..."?
DM: I didn't write the line! Have no idea why she says that, but I rather like it. I suspect Emma Thompson, who did some rewrites when I was off the project (I came and went). 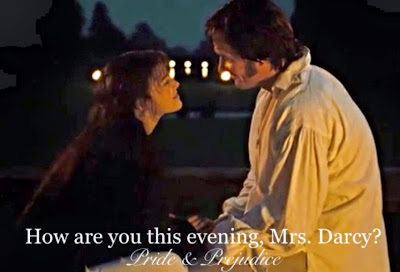 J: I love the romantic "Mrs. Darcy" (American ending) scene even though it was only shown for the American audience and was omitted for the UK and international release of this movie. Entertainment Weekly magazine listed it as one of the "Fine Finales: 21 Movie Endings We Love" as the ending did not end in a typical wedding ceremony between Elizabeth & Darcy. Was this the original ending you wrote and intended for this movie?
DM: As for the ending, I think Emma Thompson was involved at one point and she wrote a wonderful ending but they shot it far too romantically, at night, and it didn't work. I wanted an ending which didn't have the obligatory wedding, but would be the night after, or that took place in the dark countryside while the wedding was going on. So it was a sort of combination of the two. But Emma's was made, as I said, too sugary for an English audience (not her fault) so they just cut it, to end in Mr. B's study, which is a bit abrupt but I rather like it -we can imagine the wedding and their subsequent life.