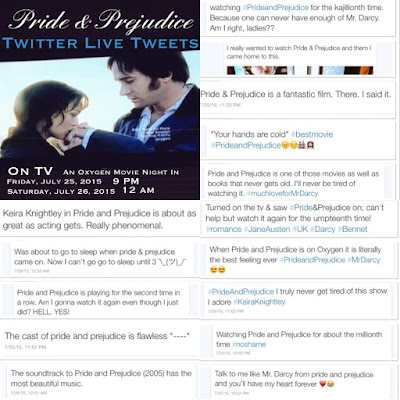 Last Saturday (July 25th) night and early Sunday (July 26th) morning, there was another back-to-back (as always) airing of Joe Wright's 2005 Pride & Prejudice movie starring Keira Knightley & Matthew Macfadyen on TV, on Oxygen channel. I almost missed watching and live-tweeting this movie as I was out of town this past weekend. Glad I still made it and was able to live-tweet the first airing of the movie. Just got home earlier tonight. So, I'm late in posting this here. I previously posted part 4 and part 3. Then, I posted part 2 of this when it aired back-to-back on Bravo and had first posted about this last May 24th, when it aired twice in a row on Oxygen. I guess this will be a series of posts whenever this movie is broadcast on TV (but of course, it depends, If and when I get a chance to see and live tweet it). I said on twitter I may or may not watch this as I was out of town and wasn't sure I would be able to watch and live tweet it. Fortunately, I made it. Yay! So, Saturday night, I watched and actively live tweeted during the first airing (starting from 9:00 pm, but slightly live tweeted on its second airing at 12:00 am East Coast Time as I was too tired to do so after being busy that Saturday with a family event that afternoon). I had a lot fun with other fans who live tweeted and even stayed up until after midnight to watch this movie again (with all 3 of these hashtags: #pandp2005, #Pride&Prejudice, and #PrideandPrejudice) on Twitter, and to watch and live tweet at the same time with fellow fans of this movie (just not as active in the second viewing)... 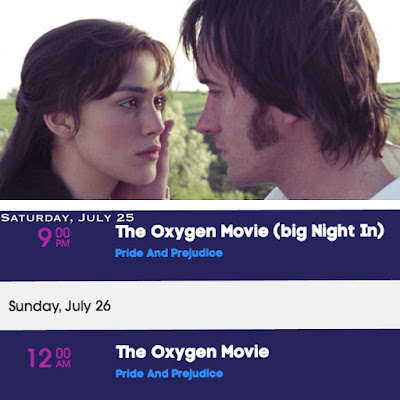 As aforementioned here before, if you check these P&P hashtags: #Pride&Prejudice and #PrideandPrejudice, it's amazing that P&P fans of this movie will always watch this movie twice (if it's on back-to-back) or more, even very late at night and early into the wee hours of the morning, and even if they've seen the movie countless times (as I did), they're exhausted and sleepy...yet they'll still watch and live tweet about it as if they've never seen it before. That's how awesome, relatable, never outdated, and never gets old this beautiful movie version of P&P is, even a decade later it is still very much watchable, entertaining, relevant, and never goes out of style as the first time of seeing it.

I've compiled and featured here some of my retweeted/favorited tweets from last night's P&P movie live tweet event. [Note: These live tweets were during the East Coast broadcast of P&P movie on both 9 pm mostly and a bit after its 12 am airings...]

Check out and read these fun (and some funny) tweets from the following P&P movie fans (including a few of my live tweets, you can read and view mine here or here) in random order below...


That moment when Pride and Prejudice comes on tv and you have to stay up late to watch it...
— Katelyn Dehle (@nerdynodus) July 26, 2015

The scene in the rain may be one of my favorite scenes in all movies of all times. #PrideandPrejudice #MrDarcy #Iloveitmostardently
— Sara Kohli (@SaraKohli) July 26, 2015

Pride and Prejudice is one of those movies as well as books that never gets old. I'll never be tired of watching it. #muchloveforMrDarcy
— Sarah (@SarahBaeDavis) July 26, 2015

The last ten minutes of the Pride and Prejudice movie is literally all I need to instantly make my heart happy.
— Katee George (@kateegeorge) July 26, 2015

Watching #PrideandPrejudice on our #Apple TV. This movie doesn't get old and remains a classic. Obviously the book is best. #classic
— Jaime Johnston (@JaimeJohnston01) July 26, 2015

what better to watch at midnight than pride and prejudice
— Beks (@bekacosta_) July 26, 2015

Seriously can watch Pride and Prejudice a thousand times and never get tired of it
— Kourt. (@kourt15_hunter) July 26, 2015

Pride and Prejudice is playing for the second time in a row. Am I gonna watch it again even though I just did? HELL. YES!
— kk (@vaguelykristian) July 26, 2015

Pride and Prejudice hands down one of my favorite movies of all time just so good
— Amy Zhu (@atthezhu) July 26, 2015

pride & prejudice is coming on again wow looks like I will be watching it twice in one night what a beautiful 6 hours
— Grace Berry (@geberry_) July 26, 2015

Pride & Prejudice brings me all the warm and fuzzies and I love you Mr. Darcy.
— IttyBittyLittleLiddy (@LidLouise) July 26, 2015

I could watch Pride and Prejudice on repeat for days.
— Taylor Goodrich (@taylorlyn91) July 26, 2015

Super stellar Saturday night over here with a bottle of red wine, pride and prejudice, and my emotions. #nailedit
— Hallie Craddock (@hallie_grace) July 26, 2015

Pride & Prejudice is visually stunning and the music score will move you! I Love this movie!
— Betty (@myracer2) July 26, 2015

When you finally see the end of Pride and Prejudice and find out Mr. Darcy and Elizabeth get married. Super giddy with happiness.
— Star⚡ (@Star_Eans) July 26, 2015

I really wanted to watch Pride & Prejudice and them I came home to this. pic.twitter.com/nrFy7rfbZg
— Emily Ankrom (@socialbutterfrE) July 26, 2015

The piano pieces in Pride & Prejudice are so exquisite and I just want to learn them all.
— kraken (@la_gabba) July 26, 2015

Quick question why is oxygen playing pride and prejudice back to back on tv who would watch it twice in one sitting??? Me, that's who
— cyd vicious (@squid_werdd) July 26, 2015

My brother is genuinely interested in Pride and Prejudice. I have succeeded as a sister.
— chameleon. (@joannxh) July 26, 2015

Watching Pride and Prejudice on #oxygen. Hubby watching w/me for 1st time. I'm translating it for him the way he translates Star Wars for me
— Gabrielle Lichterman (@hormonology) July 26, 2015

Just when you think your night can't get any better, you find Pride and Prejudice on TV 💕
— Shelby Nicolau (@shelbynicolau34) July 26, 2015

Hell if I turned down Mr. Darcy I would stare at myself in a window all day too... #PrideandPrejudice
— Rachel Hockensmith (@RachelDean22) July 26, 2015

#PrideAndPrejudice I truly never get tired of this show I adore #KeiraKnightley
— Chin Ming (@Kay07ming) July 26, 2015

On nights like this watching pride and prejudice is best
— Amanda Korzep (@AmandaKorzep21) July 26, 2015

When Pride and Prejudice is on Oxygen it is literally the best feeling ever #PrideandPrejudice #MrDarcy 😍😍
— Selia Yang (@seliacyang) July 26, 2015

I'm watching Pride & Prejudice for the 100+ time and my forever fave will always be that "fuck you" curtsey between Caroline and Lizzie
— Amanda (@FandomFairy) July 26, 2015

every time i reblog something about the 2005 pride and prejudice there's an obligatory 'i love this movie' in the tags
— natalie (@natalieschloss) July 26, 2015

I don't care how historically inaccurate the 2005 version of Pride and Prejudice is. IT'S AMAZING and I get the feels every time.
— katherine (@Katherineflea) July 26, 2015

why is the music in pride and prejudice so good
— little miss magician (@truIytrucy) July 26, 2015