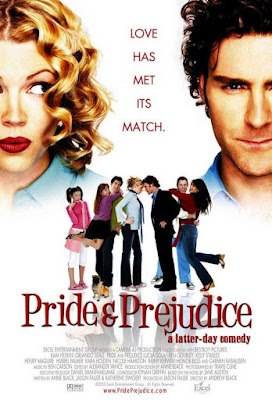 
Elizabeth Bennet is a hard-working, intelligent college student who won't even think about marriage until she graduates. But when she meets Jack Wickham, a good-looking playboy, and Darcy, a sensible businessman, Elizabeth's determination is put to the test. Will she see through their exteriors and discover their true intentions? Based on Jane Austen's timeless tale Pride and Prejudice, Bestboy Pictures presents a comedy about love, life and feminine persuasion.

The first time I saw this Pride and Prejudice (2003) - A Latter Day Comedy film, I wasn't into P&P and I remember seeing this on cable (but was unable to recall which channel...interesting, lol. It could've been starz, HBO, or Cinemax...one of these cable channels) and this was showing a lot...but for some odd reason, whenever I watch this movie, I kept missing either the beginning and or the ending. One day, it was on again, and finally got to see the whole film. It was probably around 2003 or 2004, the only P&P version I've seen at the time prior to first seeing this movie was the 1995 mini-series. I haven't seen Bride & Prejudice (the Bollywood P&P) and P&P 2005 film. So, watching this, I wasn't really thinking of its connection to Austen's P&P despite of this film's title. All I remember was this was a modern take, but I didn't get the connection much as it didn't follow closely to the novel and at the time I had read very little of the P&P novel. I wasn't really interested in P&P at the time until after 2005 movie. So, when I first saw this movie, I was only watching this as just another romantic-comedy film. I was not familiar with the characters except for Elizabeth Bennet and Will Darcy. I could at least remember these lead characters after seeing the 1995 mini-series.

I thought this movie was kinda good and funny for an independent film and without knowing so much about its (or rather lack there of) connection to Austen's P&P. All I could remember from this movie...mostly was that the main characters were Elizabeth & Darcy...the rest were a blur, lol. Then, I saw the P&P (2005) movie and finally got to finished reading the novel. Only then, I finally understood what Austen's Pride and Prejudice was really all about...interesting 'cause I saw the 1995 mini-series before this and the 2005 movie and I guess I was not paying attention to both the '95 version and the book (as it took me watching the 2005 movie to get back to reading the book and finally finished reading it...that's how much I loved the 2005 movie and how it had made me love all things P&P...which I should really not be talking about here, but in another post, when I'll post a new review for '05 film here soon).

Anyway, it's been a while since I last saw this movie. Thankfully, someone uploaded this movie in YouTube a few years ago or so and I was able to re-watched this version and I found a site that has this streaming online recently and I decided to watch this again for this review. I thought the concept was really good (loved its modern setting and Darcy sending Elizabeth IM (Instant Message) on her laptop instead of the old fashioned letter from Mr. Darcy (though a handwritten letter by him will always be the best...but that's another version, lol) in previous standard P&P versions...and this was a brilliant idea even before the Bollywood B&P and Lizzie Bennet Diaries (with its social media connection such as twitter, tumblr, and facebook)...'cause this was back in 2003, way before all these new social networks were created/invented and at the time the internet was just starting to get bigger...so, no blogger, no Wordpress, nor pinterest just yet. Perhaps they paved the way for the LBD YouTube series 'cause this version of P&P started with the same modern concept (their synopsis were a lil' similar with both Elizabeth Bennet in college in the modern world and both Darcy's are business men..likewise with B&P's Darcy, who own hotels), but used the early modern technology (mostly IM, cell phones, and laptop computers) available back in early 2000s.

Overall, I thought this movie was somewhat good and funny at times, as far as this being a typical romantic-comedy and if we're not connecting this to Austen's P&P. A few random scenes here and there were funny, but this film just lacked the cast appeal (as every single actor here starting with the leads were unknown and I've never heard of), and the acting were...just not good, in my opinion. Kam Heskin (interesting name) who played Elizabeth Bennet, just didn't do for me. I couldn't see her as EB, just that she has a cool character name from P&P. She was lackluster as EB (much like as Paige Morgan from the sequels of The Prince & Me, which she took over and ruined the character from Julia Stiles, who was great on the first movie that shouldn't have sequels...). Orlando Seale as Will Darcy was not too bad. While it was nice to see in this version that they kept Mr. Darcy in the modern world as a British guy much like the original and its previous adaptations...and he's kinda cute, but he was just not handsome enough to tempt me...see what I did there, lol. This pairing lack the sparks and chemistry as well. I just didn't see them as Elizabeth & Darcy. So, yeah, this modern version take of P&P, while it had a nice concept and premise, just didn't do for me and is one of my least favorite to watch amongst the other P&P versions I've seen (ie. 1940, 1980, 1995, 2004, and 2005 to name some).
Jane Austen Kam Heskin Orlando Seale Pride and Prejudice Pride and Prejudice 2003 Pride and Prejudice adaptations Pride and Prejudice Reviews