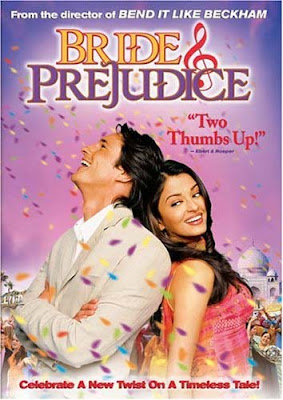 
A clash of cultures in the spirit of My Big Fat Greek Wedding, this modern musical retelling of Jane Austen's classic Pride and Prejudice is a hilariously entertaining tale of one girl's unlikely search for love! Sparks immediately fly as a love/hate relationship ignites between a small-town beauty (International star Aishwarya Rai) and a wealthy American (Martin Henderson - The Ring, Torque) who's visiting her modest Indian village! In a swirl of music, dance and comic misunderstandings, these opposites continue to attract and repel one another in a riotous romance that spans three continents! Featuring Naveen Andrews (TV's Lost, The English Patient) and a memorable performance from top recording artist Ashanti - love will eventually conquer all in this acclaimed treat from the director of Bend It Like Beckham!

I thought Bride & Prejudice starring Aishwarya Rai as Lalita Bakshi (aka Lizzie Bennet) and Martin Henderson as the wealthy American Will Darcy (Mr. Darcy) Indian/Bollywood version of Pride & Prejudice was brilliant, fun, funny, and entertaining to watch. Can never get enough of P&P in different versions including this one, which was not only fun, funny, entertaining to watch. I love the costumes and how colorful and vibrant they were, the beautiful music (the songs were very catchy and makes you want to sing along with them), and all the dancing (makes you wanna dance with the characters while you watch).

What I really loved and enjoyed about this movie was the music, costume, and dancing...not too mention, the comedy in this movie were fun and enjoyable to watch. When I first discovered this movie, I was shopping at Target some years ago and saw the DVD on the shelf and randomly bought this film as it looked interesting to me (which I don't usually buy a random DVD based on its disc cover, but this one just grabbed my attention and was one of the few exceptions), which I'm very glad I did 'cause I didn't expect to have loved and enjoyed watching this film. It was just a fun movie and I loved the catchy song and dance numbers (this was one of the first Bollywood films I discovered too and enjoyed watching...now, I must confess...I have seen lots of Bollywood films now...after seeing this one... that I've enjoyed watching since then) and funny dialogues and learned a lot about Indian culture.

Here are my favorite scenes from the movie...
(There are so many...these are some of them)
You have to watch Maya's "Cobra" dance scene for yourself...to see what I meant...LOL!

(source: nasfan786nasar)
My favorite character(s) from this movie...
Lalita, Will Darcy, Jaya, Maya, Balraj, Mr. Bakshi, Georgiana Darcy (though she only appeared briefly on this one...and she was like Colonel Fitzwilliam that this version didn't have in the scene she briefly had with Lalita...)

My least favorite character...
Johnny Wickham (what a jerk!), Mr. Kholi (so annoying, but yet so funny ), Lakhi (she was annoying much like Lydia Bennet ), Kiran (of course, the Indian version of Caroline Bingley...she's not too bad in this version, but still one of my least favorite characters ), Will Darcy's mother, Mrs. Darcy (she reminded me of Lady Catherine in P&P movie version)

My least favorite scenes...
All the sad Lalita scenes (I didn't like seeing her sad), All the scenes involving Johnny Wickham esp. when he fooled Lakhi, Mr. Kholi & Chandra's wedding scene in L.A. esp. when Lalita & Will Darcy were fighting. The scene where Lalita, her mother, and sister were in the hotel with Will and Mrs. Darcy. Didn't like how Mrs. Darcy POV of India and her disapproval of Lalita. The scene where Will Darcy confronted Johnny Wickham towards the end, but it was nice to see Darcy punched him in the face, not too mention Lalita and Lakhi both slapped his jerk face.