Say it ain't so! lol...No, they are not in another (upcoming and still in development 2011) Lost In Austen movie, but in a recent radio James Bond adaptation of Goldfinger, former Pride & Prejudice 2005 film co-stars Tom Hollander (Mr. Collions) and Rosamund Pike (Jane Bennet) were  the voices of Pussy Galore and Mr. Strap when the radio special premiered earlier this month (last April 3rd) on BBC Radio 4. See previous post here: A New Radio Production of Ian Fleming's Goldfinger features Rosamund Pike and Tom Hollander for cast info.


Here's a cast photo featuring P&P alumni Rosamund Pike and Tom Hollander standing next to each other with Sir Ian McKellen...from UK's The Guardian: 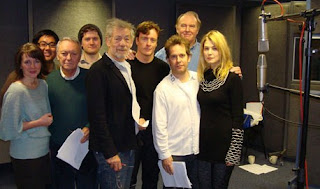 Radio 4's Goldfinger (Saturday | Listen here) was a starry affair. Ian McKellen was the titular villain, Rosamund Pike was Pussy Galore, and Tom Hollander and Tim Pigott-Smith were also in the cast. As the production unfolded, you could hear why all the actors involved had said yes: it was hammy, over-the-top and enormous fun. Toby Stephens's Bond was rather more boyish than his suave screen incarnations – after understanding Goldfinger's larcenous plans, he gasped: "He wants us to work for him. On a crime!" – and closer to Ian Fleming's style. That brought slightly mixed consequences. After an aide met her end he noted: "She was like a broken doll … poor little bitch". Pike maximised Pussy Galore's presence with a superb Southern drawl ("miaoooooow!") and Martin Jarvis, playing Fleming with his usual brilliance, was the director too. All-round top class radio.