Rupert Friend attended the premiere of The Boy in the Striped Pyjamas at Curzon Mayfair cinema last September 11th in London, England.


An article from HelloMagazine.com mentioned Rupert and Rosamund attending the premiere while Keira was MIA due to her being busy promoting The Duchess as it'll be releasing this Friday (Sept. 19th) here in the U.S.

Keira Knightely's hunky boyfriend Rupert Friend - who plays a young Nazi officer - was there, too. With Keira busy on the promotional trail with The Duchess, Rupert was joined by Bond Girl chum Rosamund Pike. 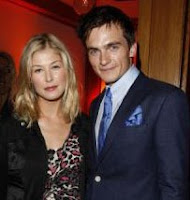 Check out pics of Rupert (including with P&P co-star Rosamund Pike, where they hang out at the Pre Drinks Reception & Premiere ) in the following links:

View Rupert Friend and Rosamund Pike photos from the London premiere below:

Watch a YouTube video from the The Boy In Striped Pyjamas world premiere below:

Here's more info on the film...

The Boy in the Striped Pyjamas

Film synopsis:
Set during World War II, a story seen through the innocent eyes of Bruno, the eight-year-old son of the commandant at a concentration camp, whose forbidden friendship with a Jewish boy on the other side of the camp fence has startling and unexpected consequences.
From IMDB

Rupert Friend arrived at the world premiere of 'The Boy in the Striped Pyjamas' at the Savoy Cinema on September 4, 2008 in Dublin, Ireland. 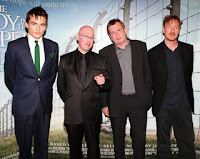 More on Rupert's The Boy in Striped Pyjamas role:

Rupert Friend is effective as a young Nazi officer with a guilty family secret.

Next, from IMDB News:

Actor Rupert Friend initially turned down a role as a Nazi officer in new film The Boy In The Striped Pyjamas - because the character "scared" him.

The British star, 26, plays the vicious Nazi Lieutenant Kotler in the Holocaust movie, about the innocent friendship between young boys Bruno and Shmuel, who is a prisoner of a nearby concentration camp.

The film is based on the book of the same name by John Boyne.

But Friend admits he was shocked by the violent nature of his character - and almost missed out on the project as a result.

He says, "I mean, it's not particularly flattering to be associated with a group of people who attempted to exterminate an entire race.

"I'm not a shouty person, and I'm not violent either. The character scared me. But then I realised that that was probably the point. It was about putting a human face on these atrocities."

However, Friend struggled throughout filming and became withdrawn after shooting the more harrowing scenes.

He adds: "I just hid in the corner, like a dog, after those scenes."

and a Rupert Friend Interview from RTE Entertaiment:

'Pride and Prejudice' star Rupert Friend, who plays Lt Kotler in 'The Boy in the Striped Pyjamas', speaks to Linda McGee about why he felt compelled to take on this latest role, how nobody ever recognises him in the street and why he likes going home.

He also raved about the joy of tea-making, his love of a pint when visiting Dublin and having big feeds... there must be an Irish passport stashed away there somewhere...


Here's an update on Rupert's current and upcoming film projects (as listed in his IMDB filmography section):