7 BAFTA-Winning Debut Films including Joe Wright's Pride & Prejudice to get Screenings in the UK! 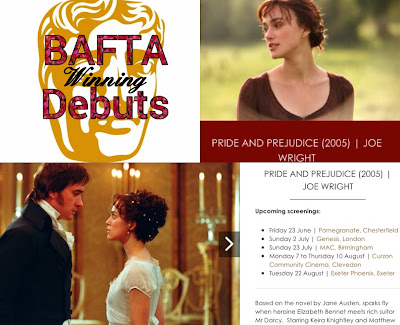 More Pride & Prejudice screenings in the UK in July and August! I previously posted here about Focus Features (who distributed our favorite Pride & Prejudice 2005 movie), which just celebrated its 15 years last month and is putting together “The Focus 15 Screening Series”, a collection of throwback screenings that will highlight some of Focus’ most successful films including Joe Wright's Pride & Prejudice (starring Keira Knightley & Matthew Macfadyen) with screenings in a few cities: London (July 6), Los Angeles (July 26), and New York (July 26). Now, BAFTA is celebrating its 70th Anniversary and is doing their own series of screenings, which they are calling BAFTA Debuts, a collection of BAFTA Winning  Breakthrough Films from seven outstanding British Filmmakers,
which included Joe Wright's BAFTA Award winning feature film directorial debut, Pride & Prejudice.

Seven first features by acclaimed British directors will screen at UK cinemas and schools from June to November
Q&As will take place at select screenings
London, 31 May 2017: The British Academy of Film and Television Arts will be showcasing seven BAFTA-winning debut feature films, from leading British directors, in cinemas and schools across the UK this summer and autumn. Screenings confirmed to date include London, Manchester, Birmingham, Bristol, Glasgow, Bradford and Newcastle, with some featuring live Q&As or pre-recorded interviews with the filmmakers.
The BAFTA Debuts film tour, which will run from June to November, is part of the organisation’s 70th anniversary celebrations, BAFTA at 70. It is supported by the BFI and the Heritage Lottery Fund (both awarding funds from The National Lottery), the Independent Cinema Office and Into Film.
The seven participating films were awarded between 2000 and 2010 in the Outstanding Debut category, which recognises a filmmaker or team whose first feature-length film sets them apart as a talent with a distinct vision and potential.

Among the seven BAFTA-winning directors are two who had received earlier BAFTA recognition for their short films, five whose debut film was also recognised in the Outstanding British Film category, and five who have since had other nominations or wins at BAFTA Film Award ceremonies.
The films were shot in various locations in England, Scotland, Wales and Northern Ireland, as well as India. They are:
2000 - Ratcatcher (dir. Lynne Ramsay)
2003 - The Warrior (dir. Asif Kapadia)
2005 - A Way Of Life (dir. Amma Asante)
2005 - Pride And Prejudice (dir. Joe Wright)

2007 - Red Road (dir. Andrea Arnold)
2009 - Hunger (dir. Steve McQueen)
2010 - Moon (dir. Duncan Jones)
Pippa Harris, Chair of BAFTA’s Film Committee, said: “These BAFTA-winning debut films represent the extraordinary range of diverse directing talent that emerged in Britain the late 1990s and early 2000s. Their early work demonstrates  their distinctive skills and huge potential, and all of them have gone on to enjoy greater success. We’re thrilled to be providing audiences across the UK with the
opportunity to see these films on the big screen, and in schools, and to hear from these incredible filmmakers as part
of our 70th anniversary celebrations.”

Education materials, including specially recorded interviews with Amma Asante, Asif Kapadia and Joe Wright, will be available for teachers via the Into Film platform: https://www.intofilm.org/. Select screenings will also feature recorded Q&As with these directors, with extended versions available on the BAFTA Guru website.
Confirmed live Q&As include:
The Warrior + Q&A with director Asif Kapadia at HOME, Manchester, Monday 3 July
A Way of Life + Q&A with director Amma Asante + Tribute to producer Peter Edwards, at Chapter Arts, Cardiff, Wednesday 12 July

For venues and show times of screenings and Q&As, and to watch the BAFTA Debuts trailer, visit the BAFTA website: https://www.bafta.org/film/bafta-debuts
To book the BAFTA Debuts screening for exhibition, visit the Independent Cinema Office website:  http://www.independentcinemaoffice.org.uk/films/baftadebuts
Interviews with the BAFTA-winning filmmakers will be available on BAFTA Guru (www.bafta.org/guru), BAFTA’s online learning channel.