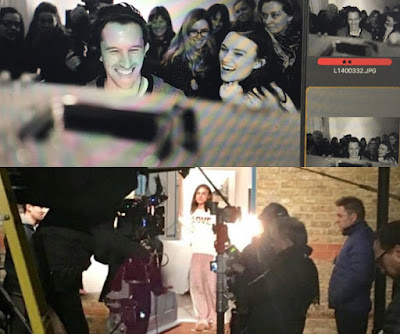 LA script editor Emma Freud tweeted a few Behind The Scenes photos (including one with KK) on twitter earlier today and magda_lenaaaaaaaa on Instagram also spotted Keira filming right in front of her house! See images below...

"Love actually 2" on my street! 20 meters from my house! What a surprise! How exciting! Keira Knightley as my neighbour :) #loveactually #rednose #rednoseactually #film #filming #keiraknightley #shessobeautiful #nottinghill #mystreet #neighbourhood #london #evening #ilovelondon
A post shared by Magdalena (@magda_lenaaaaaaaa) on Mar 7, 2017 at 2:02pm PST