Carnival Films and ITV launched the final Season 6 of Downton Abbey (Penelope Wilton co-star as Isobel Crawley) yesterday with a press launch in London, where journalists were treated to an exclusive screening of the first episode, followed by a series of Q&A’s with Executive Producers Gareth Neame, Julian Fellowes and Liz Trubridge, along with cast members including Maggie Smith, Hugh Bonneville and Joanne Froggatt. Read the full ITV press release article here. Also, the official Season 6 cast promotional photo (via its official Twitter account here) has been released with some new stills (via Variety) including a character still of Penelope Wilton as Isobel Crawley. 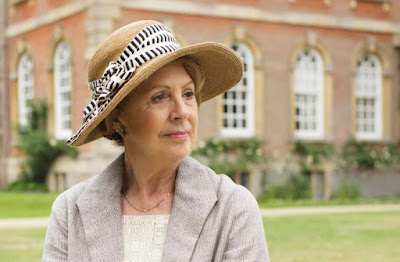 
Downton Abbey's final season 6 will be set in 1925, six months after the events of season 5. As you can see the S6 Cast promo photo has a few characters noticeably missing: Lady Rose, Tom and daughter Sybbie Branson. Spoilers Alert: Lily James as Lady Rose and her husband Atticus have relocated to the United States and Allen Leech as Tom Branson will now be staying in Boston, Massachusetts. James and Leech reportedly will no longer be in the show as regular cast members but are expected to drop in every now and then as guest appearances.
Downton Abbey Lily James Penelope Wilton Season 6 TV Series