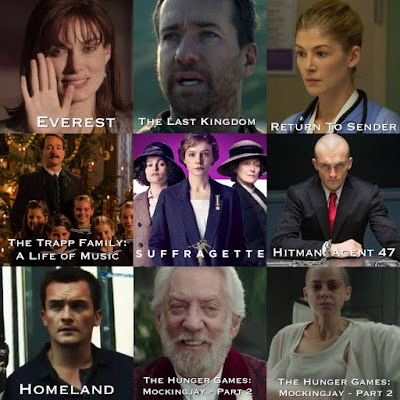 Summer 2015 is over (for some and almost over for others)! You know what that means, right? New TV series/returning shows and movies to look forward to this late Summer and Fall from our favorite P&P (2005) actors! Continuing my annual list of some Pride & Prejudice (2005) alumni with a new movie and TV series or mini-series starting mid to late this month of August through December of 2015 (as well as a few upcoming films to see in 2016!).

The following P&P '05 actors has new films (and returning TV series) to be released this late Summer and Fall 2015...

Will Carson and Mrs. Hughes make it down the aisle? Will Branson find happiness in America? Will Mary snap up the affections of the "snappy chariot" driver? Downton Abbey Season 6 premieres January 3, 2016, 9/8c on MASTERPIECE on PBS! Together, let's plan to make the coming year a celebration of Downton Abbey as we prepare to say goodbye to the show we've all come to love. 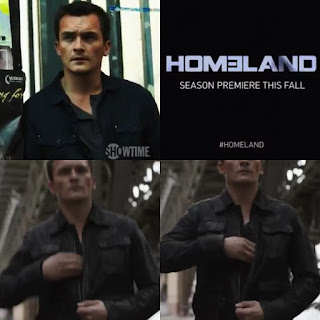 Season 5 will pick up two years after Carrie Mathison's ill-fated tenure as Islamabad station chief. Struggling to reconcile her guilt and disillusionment with years of working on the front lines in the 'war on terror,' Carrie finds herself in a self-imposed exile in Berlin, estranged from the CIA and working for a private security firm

Watch a First Look at the New Season 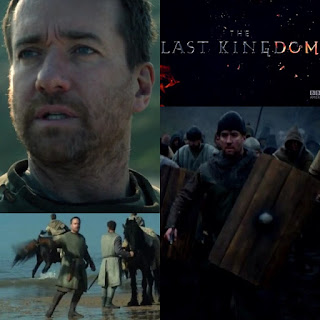 Set in the 9th century AD, many of the separate kingdoms of what we now know as England have fallen to the invading Vikings, only the great Kingdom of Wessex stands defiant under its visionary King Alfred the Great (Dawson). It is the last kingdom. Against this turbulent backdrop lives Uhtred (Dreymon). Born the son of a Saxon nobleman, he is orphaned by the Vikings and then kidnapped and raised as one of their own. Forced to choose between the country of his birth and the people of his upbringing, his loyalties are ever tested. What is he — Saxon or Viking? On a quest to claim his birthright, Uhtred must tread a dangerous path between both sides if he is to play his part in the birth of a new nation and, ultimately, recapture his ancestral lands.

Watch: Matthew Macfadyen in 2 Teaser Trailers for The Last Kingdom! 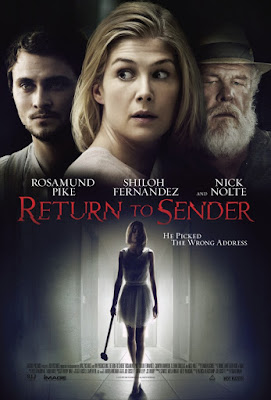 A small town nurse who gets attacked during a home invasion by a mysterious stranger (Shiloh Fernandez). Following his arrest, Miranda starts to regularly visit him in jail and build a relationship with her attacker.

Watch: Rosamund Pike in trailer for Return To Sender 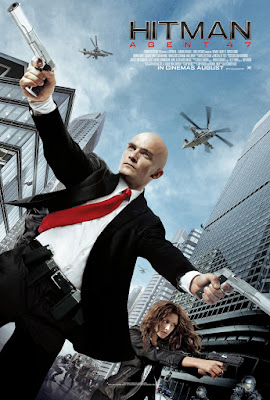 Based on the top-selling, award-winning video game franchise, "Agent 47" is an all-new motion picture about an elite and genetically engineered assassin, known only by the last two digits - 47 - of a barcode tattooed on the back of his neck. His latest target is a young woman on the run from powerful and clandestine forces. The mission brings startling revelations about the lethal agent and his prey, hurtling them on a collision course with their pasts. And this time, his number may be up. 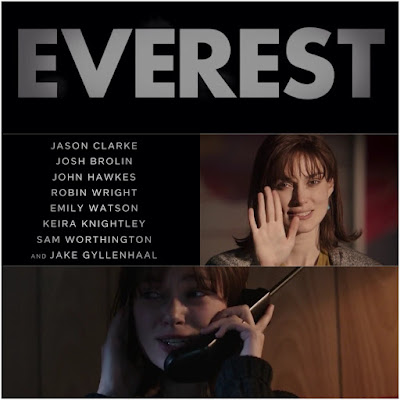 Inspired by the incredible events surrounding an attempt to reach the summit of the world’s highest mountain, Everest documents the awe-inspiring journey of two different expeditions challenged beyond their limits by one of the fiercest snowstorms ever encountered by mankind. Their mettle tested by the harshest elements found on the planet, the climbers will face nearly impossible obstacles as a lifelong obsession becomes a breathtaking struggle for survival. The epic adventure stars Jason Clarke, Josh Brolin, John Hawkes, Robin Wright, Michael Kelly, Sam Worthington, Keira Knightley, Emily Watson and Jake Gyllenhaal.

Watch: Keira Knightley in both UK & US Trailers for Everest 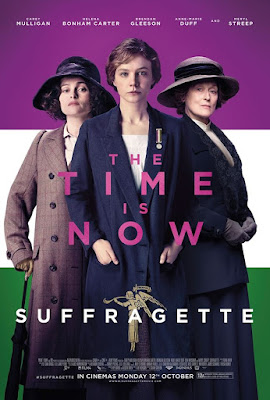 A drama that tracks the story of the foot soldiers of the early feminist movement, women who were forced underground to pursue a dangerous game of cat and mouse with an increasingly brutal State. These women were not primarily from the genteel educated classes, they were working women who had seen peaceful protest achieve nothing. Radicalized and turning to violence as the only route to change, they were willing to lose everything in their fight for equality - their jobs, their homes, their children and their lives. Maud was one such foot soldier. The story of her fight for dignity is as gripping and visceral as any thriller, it is also heart-breaking and inspirational.

The Hunger Games: Mockingjay – Part 2 now brings the franchise to its powerful final chapter in which Katniss Everdeen [Jennifer Lawrence] realizes the stakes are no longer just for survival – they are for the future. With the nation of Panem in a full scale war, Katniss confronts President Snow [Donald Sutherland] in the final showdown. Teamed with a group of her closest friends – including Gale [Liam Hemsworth], Finnick [Sam Claflin] and Peeta [Josh Hutcherson] – Katniss goes off on a mission with the unit from District 13 as they risk their lives to liberate the citizens of Panem, and stage an assassination attempt on President Snow who has become increasingly obsessed with destroying her. The mortal traps, enemies, and moral choices that await Katniss will challenge her more than any arena she faced in The Hunger Games. 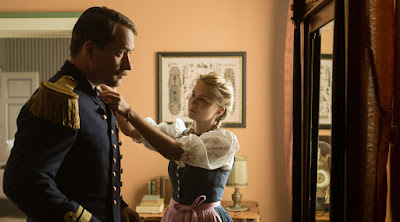 In the film, Agathe von Trapp (Eliza Bennett) has been searching for her path in life since childhood: She is the eldest daughter among many siblings, and her relationship with her father, the distinguished marine officer Georg von Trapp (Matthew Macfadyen) and his second wife Maria von Trapp (Yvonne Catterfeld), is often challenging. She develops her beautiful voice and stimulating musical talent together with her family and with the support of the famous singer Lotte Lehmann (opera singer Annette Dasch). She constantly struggles for the love of her childhood sweetheart Sigi (Johannes Nussbaum), not to mention, she must confront the menacing rise of fascism in Germany and Austria. Emigration to the U.S. finally brings a decisive step toward freedom and world success. Rosemary Harris (Spider-Man) plays the elder Agathe von Trapp. 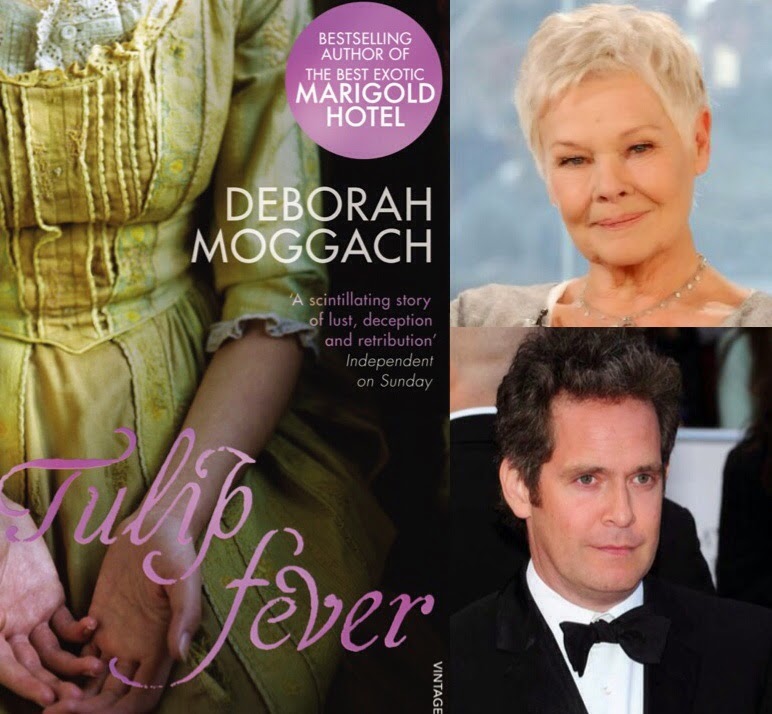 A 17th century romance in which an artist falls for a married young woman while he's commissioned to paint her portrait. The two invest in the risky tulip market in hopes to build a future together.