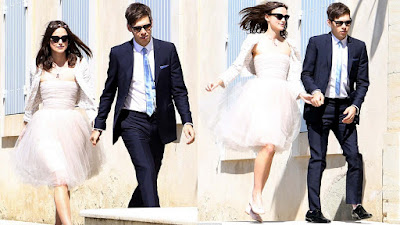 May the 4th be with Keira Knightley (after all, she appeared, though uncredited, in Star Wars: Episode I - The Phantom Menace) as she reportedly tied the knot today with fiancé (of one year), James Righton, an English co-vocalist and keyboardist for the London-based new rave band Klaxons.

Earlier in the week, various entertainment news and media has been reporting about the rumored May weekend wedding of Keira & James. While it's not confirmed yet by Keira's publicist, it appears that the wedding did take place earlier today as wedding photos had surfaced on the web. UK's Daily Mail has more photos from Knightley & Righton wedding here (including photos above/below). A big congratulations are in order to the newlyweds, Mr. & Mrs. Righton! Wishing them all the best!

Here's a few wedding photos (via UK's Daily Mail) and articles with more details of Keira & James' low-key wedding in South of France via People.com and UK's The Telegraph below... 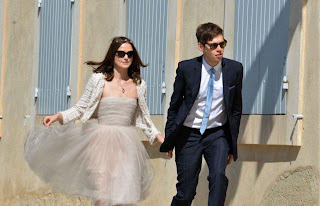 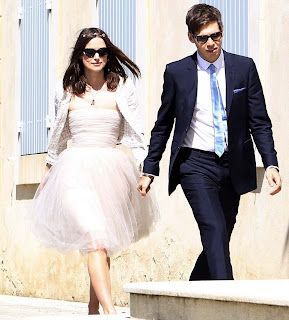 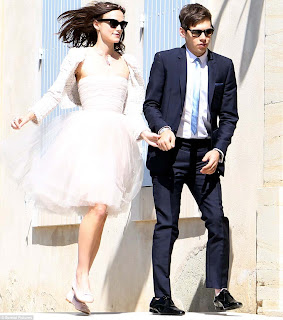 Keira Knightley has taken on her biggest role yet: wife.

The actress, 28, tied the knot with her fiancé of one year, James Righton, in an intimate ceremony at the town hall in Mazan, a small village in Provence, on Saturday.

"It was not a long service," one witness tells PEOPLE, "and very few people." The ceremony was performed by the village mayor and "occurred just before noon and lasted only about 30 minutes. Keira looked beautiful. She wore a very pretty, very elegant dress."

Knightley's choice for her big day? A strapless tulle dress that came to her knees and a classic Chanel jacket. She skipped into the ceremony in nude flats and her hair down, crowned with daisies.

Thirty to 50 guests are reportedly invited to attend an afternoon garden luncheon and an evening party at which Righton's band, The Klaxons, are expected to perform. Guests are staying at the Chateau de Mazan, a four-star hotel in the village of 6,000. The wedding ceremony and party are being held in Mazan where Knightley has owned a small wine-growing farm since 2010. A reception tent was spotted there on Friday, and the couple smooched in the airport when Righton arrived earlier in the week.

Knightley and the Klaxons keyboard player, 29, got engaged in May 2012, about a year after they were first spotted publicly together. They reportedly met after being introduced by fashion correspondent Alexa Chung.

Buzz has been that Knightley, the face of Chanel's Coco Mademoiselle fragrance, would wear a custom-made dress by Chanel's Karl Lagerfeld.

"We're not really big-wedding types," she told Marie Claire in March. "I could have six fake weddings. God, that would be expensive. I don't need to have all that."

From UK's The Telegraph

Keira Knightley, the actress, married her rock star fiance James Righton in a low-key ceremony in the south of France on Saturday - before being driven away in a battered Renault Clio.

She is one of Hollywood’s biggest stars while he is the singer in an indie rock band – so their wedding might have been expected to be a flamboyant affair.

But when Keira Knightley and James Righton married in the south of France yesterday, it was so low key and discreet that some of the 11 guests were wearing flip flops.

Others wore jeans to witness the couple tie the knot at the town hall in Mazon, near Avignon, ahead of a party at her family's nearby estate.

The bride, 28, who is the face of Chanel’s Coco Mademoiselle perfume, wore a dress and jacket by the designer, along with a string of flowers in her hair and flat pink pumps. Her husband, 29, wore a dark blue suit and tie and both wore sunglasses. Afterwards the couple, who arrived together, were driven away in a Renault Clio.

One onlooker said: “Keira looked extremely moved by the whole thing – there were certainly tears of happiness.

“There were cheers of 'Well done, Keira’ when she came out, but there were so few people present so they didn’t make much noise.

“It was amusing to see them being driven away in a battered old Renault Clio – it certainly looked as though it had seen better days.”

Guests at the ceremony included Knightley’s parents – her mother Sharman Macdonald, 62, a playwright, and her father, Will Knightley, 67, an actor – as well as her brother Caleb, who attended with his wife, Kerry Nixon, a web designer. They married in Glasgow in 2011 when Knightley was bridesmaid.

Righton’s father Nicholas and brother, Bill, were also in attendance as were members of his band, the Klaxons.

For the reception at Knightley’s family’s estate in the town, around 120 bottles of white and red had been ordered, along with bottles of champagne.

Guests were expected to include Sienna Miller, the actress, and Karl Lagerfeld, the director of Channel.
Locals in Mazon, which has a population of just over 5,000, have become used to seeing Knightley since her family bought the estate there in 2010.

Jean-Francois Durand, a near-neighbour, said: “The family keeps a very low profile but we are aware of how famous they are abroad.

“This is a very beautiful part of France and it is not surprising people want to come to celebrate their marriages here.”

The estate has an eight bedroom house, where Knightley has been staying with Righton.

It also has a vineyard and is set within olive groves and truffle oaks, close to Mount Ventoux - one of the most famous mountains in France for its frequent appearances along the route of the Tour de France.

Most of the guests were staying in a chateau in Mazan, which was once the family home of the Marquis de Sade, the French aristocrat and author, notorious for his debauched lifestyle and writings.

The couple got engaged in May 2012 after being introduced by a mutual friend, Alexa Chung, a model. They live in east London.

Knightley, who previously dated her Pride and Prejudice co-star Rupert Friend for five years, said earlier this year that she and Righton were in no rush to get married, hinting they would have a low-key ceremony when the time came.

“We’re not big-wedding types. I don’t need to have all that,” she said.
“I’m just trying to enjoy the engagement bit. My parents are together after 40 years.

“The fights are there, but they love each other. It’s not like the first three months, the first two years, whatever it is, but I think it gets more interesting, or I hope so.”