In Theaters Today: Made In Dagenham


Based on a true story, Made in Dagenham portrays a decisive moment in that decade of upheaval, when the fight for equal rights and pay was led – unexpectedly – by ordinary working-class women with one foot in the kitchen, one foot on the factory floor, and ears glued to the pop coming over the radio and telly from far-off London (19 kilometers and a world away). It‟s a vintage “girl power” tale.

Rosamund Pike, Sally Hawkins, and co-stars and the film itself, Made In Dagenham had been getting rave reviews!

Check out and Read The Film Stage's (who gave it an A!)
[Review] Made in Dagenham]

Rosamund Pike plays Lisa, an educated housewife who is tired of being thought a fool by her husband. While her role in the piece is small, Pike makes the best of every frame, adding to her already glowing reputation as a tender and talented actress.


Watch the trailer of Rosamund Pike's upcoming film, Made In Dagenham
as well as the new trailer below...

(source:TheTubeTrailers)
I made some screen captures from
the new trailer featuring Rosamund Pike below... 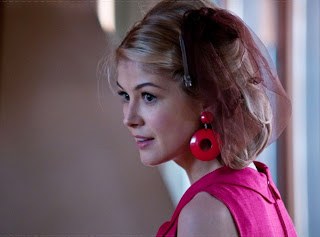