So, Keira Knightley's out (she was reportedly attached to the Eliza Doolittle role, but dropped out of it, because it was taking too long to get started on the film) and now Carey Mulligan's (or so blogs/media and Emma Thompson are saying she has been cast...but is she really...) in? Interesting...with Emma Thompson reportedly writing the screenplay and saying she is.

Here's an article saying so, from...


…Carey Mulligan is set to play Eliza Doolittle in the upcoming remake of My Fair Lady, written by Emma Thompson. Previous rumors suggested that Keira Knightley and Natalie Portman were interested in the coveted role of Doolittle, however Thompson revealed that Mulligan has been cast.

Though no one has been cast as male lead Henry Higgins, rumors have sugguested that Hugh Grant might be linked to the role. On this subject Thompson stated, “But we still don’t know about Higgins. I love Hugh so I’d love him to do it, he might want to, he might not want to, so we don’t know yet. But hopefully we’ll make it later this year.”

It's interesting that this casting news is all over the web, but Carey herself was just interviewed by Collider.com and said that she isn't signed or cast in this film, lol.

Here's a new interview of Carey from Collider.com:


Since her Oscar nominated performance in An Education, all eyes have been on British actress Carey Mulligan. With a role in Wall Street 2: Money Never Sleeps, recently pushed back to a September 24th release date, and the intriguing dramatic thriller Never Let Me Go, based on the novel by Kazuo Ishiguro, everyone wants to know what she’ll be doing next.

According to the actress herself, she stated during the press day for her latest drama The Greatest (which we’ll have more on closer to the April 2nd release date) that she has not signed on to play Eliza Doolittle in My Fair Lady, nor has she received a call to do Girl with the Dragon Tattoo, at this point, but she is looking to play really interesting characters that challenge and terrify her.  She also talked to us about working for Mark Romanek.

Check out what she had to say...

Question: Emma Thompson said that you’re set to play Eliza Doolittle in My Fair Lady. Is that true?
Carey:  Oh, that’s nice. Well, that’s hugely flattering and that would be great. I really don’t know, at this point, what’s happening with that. That’s lovely that Emma said that. That’s really nice. But, I honestly don’t know.

What about Effie, which she also wrote?
Carey:  I actually don’t know what’s happening with that. I read that script about two years ago. That’s another difficult independent British film. That’s hard to get made. I don’t know if that film is going, but yeah, I was attached to that.

Are you just trying to figure out your next move then, while reading blogs that say you’re cast in movies that you haven’t been cast in?
Carey:  I’d love to read a blog that said I was going to be in that movie. Yeah, I just haven’t found the right thing yet, I don’t think, since all of this stuff has been finished. I have a couple of other films coming out, later in the year, so I’d like to do a job before I promote something else. I don’t want to be just constantly talking about myself. It would be more fun to do some work, but the right thing hasn’t come along. I’d like to do a play, but I can’t find the right thing. I don’t want it to be a starring role. I just want to play a really interesting character. I’m just taking a minute to figure out what that is.

So, there you go...Carey herself said that she's not signed on for My Fair Lady, Effie, and the Girl with the Dragon Tattoo films for which she has been rumored to be cast in...

Btw, if you read further about Carey's interview in the link^, she was talking about her Never Let Me Go film with Keira... 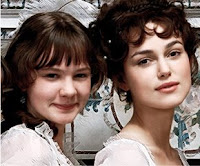 Here's the interesting part that she said about her and Keira...


Me and Keira have known each other for about five years ’cause I did my first job with her. We played sisters in Pride & Prejudice, and then came back and, effectively, played sisters again because they’ve spent their whole lives together, but in a very different way.