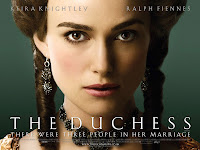 According to The LA Times:

To spark interest among fashionistas, Paramount Vantage has teamed up with Fashion Week Daily to co-host an elegant party during the upcoming New York Mercedes-Benz Fashion Week.

The glam “Duchess” bash will take place in the Plaza’s ostentatious Grand Ballroom on Sept. 9, the night before the film’s New York premiere. (The movie opens Sept. 19.) This is the week that simply everyone who is anyone in fashion will be in town for the Spring ‘09 fashion shows.

END_OF_DOCUMENT_TOKEN_TO_BE_REPLACED

Speaking of The Duchess...


The Duchess will get a New York premiere on September 10th, with Keira in attendance.