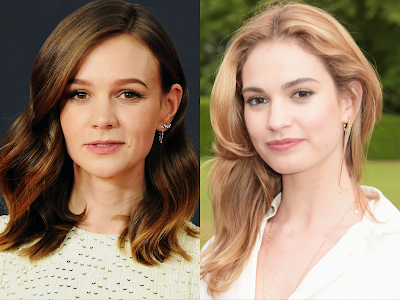 Carey Mulligan has recently been cast to lead star in a new Netflix movie titled The Dig, according to THR. It is said to be based on a true story set at the turn of World War II, which focuses on a widow Edith Pretty that will be played by Carey. Lily James just joined the cast as an archeological student named Peggy Preston. Ralph Fiennes also star. It aims to start filming in early 2020.

Read more info. via THR below...

Ralph Fiennes is already on board this true-life story.

Lily James is in negotiations to join Carey Mulligan and Ralph Fiennes in Dig, a period drama set up at Netflix.

Simon Stone (The Daughter) is directing what is shaping up to be a thoroughly British pic, with Gabrielle Tana (Philomena, The Invisible Woman) producing.

Based on a true story and set at the turn of World War II, Dig focuses on a widow (Mulligan) with a hunch that her land contains buried riches, something that proves true. She then turns her property into an archeological site.

Mulligan plays the widow, Edith Pretty, while Fiennes is Basil Brown, a local archeologist who works with her only to see himself pushed aside by museum curators.

James portrays an archeological student named Peggy Preston. When she works at the dig, she becomes disillusioned by the many domineering men but finds friendship with Pretty and Brown.

Carey Mulligan to Star in Netflix Drama 'The Dig' (Exclusive)

Carey Mulligan is final negotiations to star opposite Ralph Fiennes in the period drama The Dig at Netflix.

Based on a true story and set at the turn of World War II, Dig focuses on a widow (Mulligan) with a hunch that her land contains buried riches. The hunch ultimately pays off.

Mulligan will be playing the widow, Edith Pretty, while Fiennes will play Basil Brown, a local archeologist that works with the widow only to see himself pushed aside by museum curators.
Simon Stone (The Daughter) is directing the pic, with Gabrielle Tana (Philomena, The Invisible Woman) producing.

The project was previously set up with BBC Films, with Nicole Kidman attached to star opposite Fiennes, before moving to the streamer. Mulligan previously worked with Netflix on the Dee Rees drama Mudbound.

Nominated for an Oscar for her role in An Education, Mulligan was most recently in theaters with Paul Dano's critically acclaimed drama Wildlife and on the stage in Girls and Boys on the West End and on Broadway.
Carey Mulligan Lily James Movies Netflix Ralph Fiennes The Dig