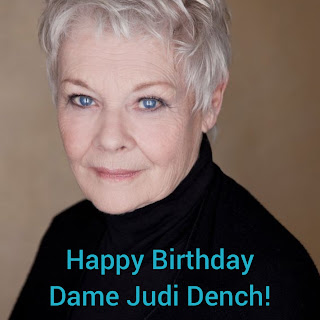 Academy Award Winner (for Best Supporting Actress in Shakespeare in Love) Miss Dench is one of the busiest English actresses around and has done countless of films (ie. Bond Films, As Time Goes By tv series, Mrs. Henderson Presents with P&P co-star Kelly Reilly, Shakespeare In Love, Ladies In Lavender, and many other made for TV movies and feature films...too many to list here, just check out her IMDB filmography) throughout her very long acting career, but to us P&P movie fans, she will always be known as the proud and domineering Lady Catherine (aunt of Mr. Darcy and patroness of Mr. Collins), even in her small role and brief scenes in the P&P 05 film, her presence and appearance was unmissable and important to the story. In my opinion, Judi Dench played the best Lady Catherine (from all P&P adaptations I've seen...) as she really transformed to that mean and scary woman you love to hate, lol.

Check out Judi Dench as Lady Catherine screen captures as well as quotes from her, her character Lady Catherine, and director Joe Wright as well as two P&P video clips from the movie featuring her below...

Director Joe Wright did a great job in casting her and I love how he cast her in the film and what he wrote to her, lol..
.
According to JW's DVD commentary:"I wrote her a letter saying 'I love it when you play a bitch, please come and play a bitch for me.' And she succumbed (referring to Judi Dench)"

Stills of Judi Dench in Pride & Prejudice as Lady Catherine 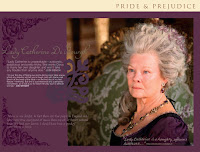 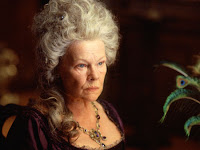 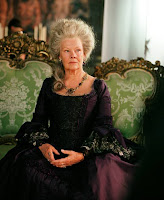 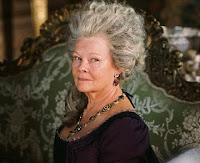 "Come, Miss Bennet and play for us, for music is my delight. In fact, there are a few people in England who have more true enjoyment of music than myself, or better natural taste. If I had ever learnt, I should have been a great proficient." (Lady Catherine)

"Lady Catherine is unspeakable - autocratic, suspicious and pretty tricky. She wants Darcy to marry her own daughter, and won't take any trouble from anyone else." (Judi Dench)

"On our first day of filming, we shot a dining room table scene, which any director will tell you is tough, and with Dame Judi Dench at the head of the table - on the first day of my first feature - terrifying. But she is a professional and a genuinely nice person, so it was a joy to watch her play such a difficult woman." (Joe Wright)

"On my next film, I played Lady Catherine in Pride & Prejudice. Barbara Leigh-Hunt, who played the same role in previous production was brilliant. I ring her up and said, I was going to copy her. But I ended up playing [Lady Catherine] different. Joe Wright directed it..." (Judi Dench)