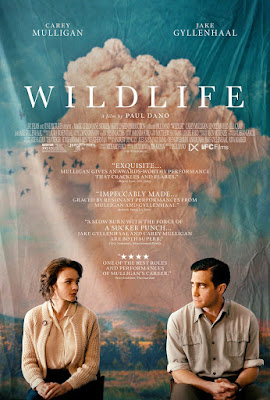 I previously posted here, the trailer for Wildlife starring Carey Mulligan and Jake Gyllenhaal, whom she previously co-starred with in Brothers (along with Natalie Portman and Tobey Maguire). Now, an official poster for the film has just been released (see above!). Wildlife is a directorial debut for Carey's fellow actor Paul Dano. The film (which premiered  to rave reviews at Sundance Film Festival last January and recently at Cannes Film Festival) opens in U.S. Theaters October 19th.

The film, which premiered at the Sundance Film Festival to rave reviews, is adapted from the novel of the same name by Richard Ford. Gyllenhaal plays Jerry, an out-of-work golf pro whose 1960s nuclear family is shaken when he goes to help fight a raging forest fire near the Canadian border, leaving his wife, Jeanette (Mulligan), in the position of keeping the household afloat. Newcomer Ed Oxenbould plays Joe, the couple’s only child, who witnesses his mother’s efforts. (EW)
Carey Mulligan Movie Wildlife