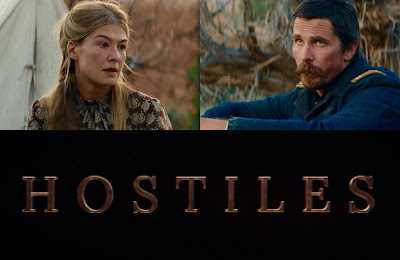 A teaser trailer has just been released (via Deadline) for Rosamund Pike's upcoming film Hostiles starring Christian Bale and Pike (as Rosalie Quaid, who lost her entire family to a vicious Indian attack). The film is currently playing at Telluride Film Festival and is a much buzzed about film (even without a film distributor). It is written, produced, and directed by Scott Cooper (Out of Furnace, Crazy Heart).

Read more info. and watch the teaser trailer for Hostiles (with screen captures featuring RP) below...

(source: IMDB)
‘Hostiles’: Watch Exclusive Trailer For Hot Telluride & Toronto Title
EXCLUSIVE: Here is an exclusive first peek at footage for Hostiles, the Scott Cooper-directed Western acquisition title that became the talk of Telluride for the quality of the picture and the strong performance by Christian Bale as well as Rosamund Pike and Wes Studi. The film played Telluride instead of Venice because the former made it part of a special Bale tribute, and perhaps no movie up for grabs captured the fancy of critics/journalists there more than this film. The big question: which distributor will step up, acquire the film and launch it in awards season?

Bale stars as an Army captain who in 1892 is assigned to transport an old Indian enemy (Studi) back to his tribal home. Along the way he picks up Pike, who has lost her entire family to a vicious Indian attack. There is hardness and hatred that has gotten the picture compared to the classic 1956 John Ford film The Searchers, which starred John Wayne. [Deadline]