Lionsgate to release both in US/UK 'The von Trapp Family: A Life of Music' starring Matthew Macfadyen 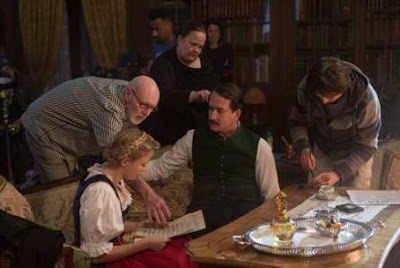 Great news for those of us in the US/Canada and UK who wants to see Matthew Macfadyen (new on set photo by Lionsgate) in his upcoming film The von Trapp Family: A Life of Music (there's finally a page for it on IMDB) movie in theaters/Cinemas as Lionsgate (The Hunger Games Movies) has acquired both the US/Canada and UK distribution rights to release it for a planned Christmas 2015 theatrical release! The movie was said to wrapped up filming this week in Salzburg with MM, director Ben Verbong and co-stars Yvonne Catterfeld, Eliza Bennett. Germany and Austria get to see it first as it will premiere there in November 2015.

By the way, I noticed that Vanessa Redgrave (who was originally mentioned as playing the older version of Eliza Bennett's Agathe Von Trapp role) is no longer in the cast list. Looks like it's Rosemary Harris (from all 3 Spider-Man movies with Toby Maguire...and FYI, she's P&P 1995's Jennifer Ehle's real-life mother...so there's another P&P connection in this movie). I think this is actually good casting as she does look like the older version of Miss Bennett.

Read more info. about the movie in the following Deadline and BroadwayWorld articles below...

Lionsgate has acquired U.S.-Canada and U.K. rights on the Tele Munchen Group pic The von Trapp Family – A Life of Music. The film directed by Dutch filmmaker Ben Verbong takes a different angle on the Sound of Music story the entire world knows and loves. Pic is based on Agathe von Trapp’s autobiography “Memories Before and After the Sound of Music,” which tells the story behind the legend. The screenplay was written by Christoph Silber (Good Bye Lenin) and Tim Sullivan (Letters to Juliet).

In the film, Agathe von Trapp (Eliza Bennett) has been searching for her path in life since childhood: She is the eldest daughter among many siblings, and her relationship with her father, the distinguished marine officer Georg von Trapp (Matthew Macfadyen) and his second wife Maria von Trapp (Yvonne Catterfeld), is often challenging. She develops her beautiful voice and stimulating musical talent together with her family and with the support of the famous singer Lotte Lehmann (opera singer Annette Dasch). She constantly struggles for the love of her childhood sweetheart Sigi (Johannes Nussbaum), not to mention, she must confront the menacing rise of fascism in Germany and Austria. Emigration to the U.S. finally brings a decisive step toward freedom and world success. Rosemary Harris (Spider-Man) plays the elder Agathe von Trapp.

TM International is handling worldwide sales. Presales have also been made to Germany’s ZDF, while TMG’s theatrical distribution arm, Concorde Filmverleih and Constantin Film Vienna will release the picture in Germany and Austria in November 2015. Lionsgate is planning a Christmas 2015 release. Pic is currently being shot in Salzburg, Austria and Bavaria, Germany.

Just in time for the 50th anniversary of the worldwide box office blockbuster The Sound of Music, Lionsgate, a premier next generation global content leader, has acquired all U.S., Canadian and UK distribution rights to Tele Munchen Group's The von Trapp Family A Life of Music, the two companies announced today. Award-winning Dutch filmmaker Ben Verbong, who has earned acclaim with family films such as The Girl with the Red Hair, The Slurb and Mr. Bello, is directing,and Eliza Bennett (Broadchurch, Nanny McPhee), Matthew Macfadyen (Anna Karenina, Three Musketeers) and Academy Award nominee Rosemary Harris (Spider-Man 1-3, Tom & Viv) are starring in the film currently being shot in Salzburg and surroundings as well as Bavaria.

"As a native Austrian, I am especially proud to bring the real story played by such a great cast together with such a prestigious partner as Lionsgate, one of the leading and prestigious US media companies which I was significantly involved in," said Tele Munchen Group Chairman Dr. Herbert G. Kloiber.

"We're proud to distribute a property based on such a beloved and globally recognizable brand and pleased to extend our partnership with our friends at Tele Munchen," said Lionsgate President of Worldwide Television & Digital Distribution Jim Packer. "We believe that The von Trapp Family A Life of Music will resonate with Sound of Music fans around the world this Christmas as well as audiences discovering this incredible story for the first time."

The film is produced by Clasart Film- und Fernsehproduktion, Munich in cooperation with ORF and Concorde Media, Vienna, with Executive Producer Herbert G. Kloiber and Producer Rikolt von Gagern. It is financially supported by the FilmFernsehFonds Bayern, the Filmstandort Austria FISA and by the Filmforderung Salzburg / Standort Agentur Salzburg.

TM International is handling worldwide sales. Presales have also been made to Germany's ZDF, while TMG's theatrical distribution arm, Concorde Filmverleih and Constantin Film Vienna will release the picture in Germany and Austria in November 2015. Lionsgate is also planning a Christmas 2015 release.

The deal was completed during the Cannes Film Festival by Mr. Packer and Senior VP Acquisitions Marc Danon on behalf of Lionsgate and Thomas Augsberger on behalf of TMG.

And that's a wrap!! Loved working with these guys. The best fake brothers and sisters a girl could ever ask for! 🎥#TrappFamily #Bavaria #setlife #TrappFamilie
A photo posted by Eliza Bennett (@elizahbennett) on Jun 4, 2015 at 9:55am PDT