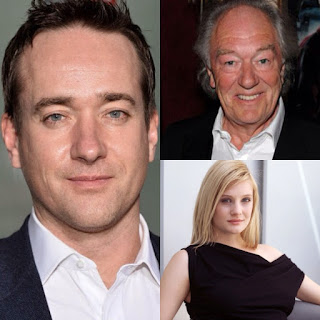 ITV announced today in an official Press Release that Matthew Macfadyen has joined the stellar ensemble cast of their upcoming new drama, Churchill's Secret. I've read about this new drama and casting of Michael Gambon (he previously co-starred with MM in Perfect Strangers aka Almost Strangers TV Mini-series back in 2001 and in a play, King Henry IV in 2005) last week and was thinking MM should be on this and now he is! Wow, I couldn't believe it when I saw his name on the casting announcement...had to do a double check, haha! So glad he's part of this as I'm sure this will be a great drama to watch. I'm also glad that this will be showing on PBS next year! Another new period drama with Matthew to look forward to!

Romola Garai (The Hour, Legacy) takes the part of nurse Millie Appleyard and Churchill’s adult children are played by Matthew Macfadyen (Ripper Street, The Enfield Haunting) as Randolph Churchill, Daisy Lewis (Downton Abbey) as Mary Churchill, Rachael Stirling (The Bletchley Circle, Detectorists) as Sarah Churchill and Tara Fitzgerald (Game of Thrones, In the Club) as Diana Churchill.
Set during the summer months of 1953 Churchill—now Prime Minister for the second time and in his late 70’s—suffers a life-threatening stroke, which is kept secret from the world.

Told from the viewpoint of his young Nurse, Millie Appleyard, the drama follows his battle to recover as his long suffering wife Clemmie, desperately hopes the stroke will force Winston to retire while his political friends and foe scheme to plot who will succeed him.

Meanwhile his adult children - descend on Chartwell, unsure if he will pull through, as tensions within his family begin to surface.

Daybreak Pictures, part of the Tinopolis Group, will produce the drama with Executive Producers Hal Vogel and David Aukin overseeing production.  Churchill’s Secret will be co-produced with MASTERPIECE, where Rebecca Eaton is Executive Producer.  It will air in the US on PBS in 2016.

The 120’ film will be directed by Charles Sturridge (Da Vinci’s Demons, The Scapegoat, The Road to Coronation Street) with Timothy Bricknell (From There to Here, The Fear, Eric & Ernie) producing.
Passion Distribution who are part of the Tinopolis Group will handle international sales of Churchill’s Secret.

ITV’s director of Drama Steve November and Controller of Drama Victoria Fea have commissioned the drama.

Churchill’s Secret is a Daybreak Pictures/MASTERPIECE Co-production for ITV.