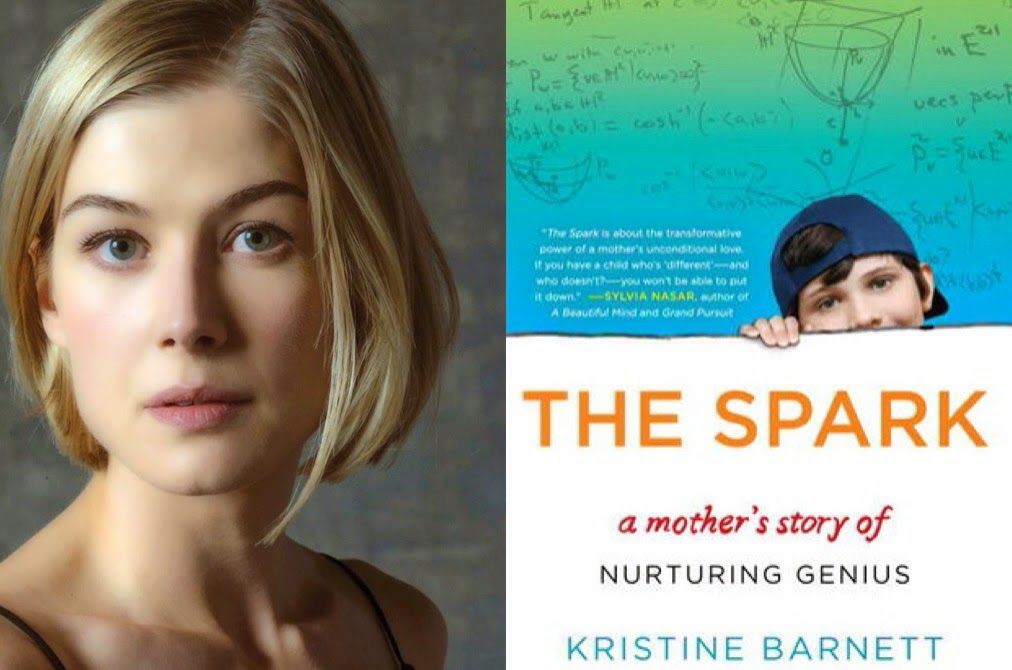 According to Ace Showbiz, Oscar Nominee Rosamund Pike (image from Gone Girl | The Spark book via Amazon) is going to headline and star in a true-story movie, The Spark, about a mother who helps her young son overcome his autism and leads him to become a genius. The Spark: A mother's story of Nurturing Genius by Kristine Barnett is a best-selling memoir published in April 9th, 2013. More info. about the book here on Amazon.

Read more info. about the movie via Ace Showbiz below...

Fresh off her critically-acclaimed portrayal as a psychopath in David Fincher's "Gone Girl", Rosamund Pike books a lead role in "The Spark". Adapted from Kristine Barnett's memoir, it centers on a mother and her relationship with her autistic son Jacob.

When Barnett was told Jacob may never be able to tie his own shoes, she knew that she had to step in and make a difference in her son's life. Against the advice of her husband, she pulled Jacob out of special education classes and worked with him to defy the odds of Autism controlling his life. The child would grow up to become a quantum physicist before the age of 13.

According to Tracking Board, the true-story pic was initially developed by Warner Bros. under the title "Scattered Skills", but it is now moving forward at Relativity Media. Michael Cunningham is set to write the script based on the best-selling book "The Spark: A Mother's Story of Nurturing, Genius, and Autism".

Speaking of Rosamund, she's going to be very busy filming movies again, which is good. I'm already interested and looking forward to this movie, if indeed, she's confirmed to star on this one. Here are her upcoming and in development films via her current IMDB filmography list...