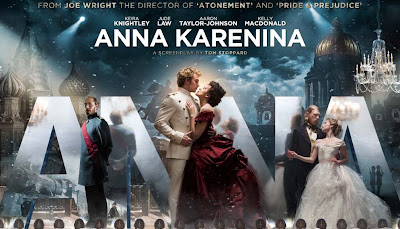 Anna Karenina opens in UK Cinemas on September 7th and two months later in the US (in select theaters) November 9th (and will possibly go in wide release soon after or in the following weeks).

ALL ABOUT ANNA: Banana Republic is traveling back in time to 19th century Russia for a line bowing in October and inspired by the film, “Anna Karenina,” opening Nov. 9 and starring Keira Knightley and Jude Law. “It’s a very different take on ‘Anna Karenina,’” Banana Republic’s creative director and executive vice president of design Simon Kneen, said of the film. “Costume designer Jacqueline Durran said her brief was using a bit more Fifties-influence of Dior’s New Look. It was historical but had a twist to it as well.”

Durran pulled her favorite pieces from the Banana Republic collection, which become the capsule. Durran called curating and styling a capsule collection for Banana Republic inspired by the film “a once in a lifetime experience. I was given the chance to apply my passion for period styles to a collection that translates to fashion today.” Banana Republic produced the collection in partnership with Focus Features.

“We’re going to pull it together in a way that feels wearable,” Kneen said. Faux fur on collars, hats and coats fall under the spell of Romantic Russian Imperialism, while richly-textured fabrics in black and dove gray betray the Dior influence. Knightley in the film wears piles of pearls and crystal jewelry that Banana Republic reinterpreted. Prices range from $39.50 for a blouse to $325 for a coat. Jewelry and accessories range in price from $29.50 for jewelry to $250 for a handbag.

The collection will be featured in Banana Republic’s October advertising campaign, while images from the film will be used in stores.