Movie News: Keira Knightley to star in 'The Beautiful and the Damned' 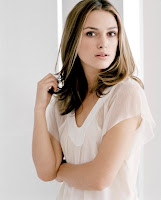 Another new movie for Keira Knightley...looks like that rumor about her taking a break from acting? was just that a rumor because now there are 2 new movies (this and Keira Knightley tops 'Last Night' cast) that she reportedly in talks and just signed on along with King Lear that she'll start filming early next year.

According to BBC News, British actress Keira Knightley is in negotiations to play the wife of US novelist F Scott Fitzgerald in a new biopic, according to reports.

The film, The Beautiful and the Damned, will look at the relationship between the Great Gatsby author and Zelda Sayre, the woman he married in 1920.

The marriage was volatile, inspiring incidents in Fitzgerald's novels and Zelda's only book, Save Me the Waltz.

The director will be Nick Cassavetes, the man behind 2004 hit The Notebook.

According to the Hollywood Reporter, the movie - which takes its title from Fitzgerald's second novel, The Beautiful and Damned - is the brainchild of independent production outfit the Film Department.

It says the film will tell "the untold story of Zelda and F Scott Fitzgerald, who became Jazz Age icons known for living large, soaring high, and crashing hard."

Their turbulent relationship inspired a short-lived West End musical in 2004, starring Michael Praed as the Tender is the Night author.

Knightley can currently be seen in The Duchess, a period drama about an 18th Century noblewoman trapped in a loveless marriage.

The Beautiful and the Damned is expected to begin shooting next April.

Casting News Keira Knightley Movies The Beautiful and the Damned