I love everything about this film from the first scene to the last one. The entire film was just simply amazing to watch. I must say, I've seen this film several times than I care to count (in fact, I have lost count already on how many times, lol).


Still, this film never failed to impressed me. The more I watch it, the more I love, love, love it. Thank goodness it's only 2 hours long as I can watch it 2-3 times a day if I have to or have the time, haha. It is just that addictive and fun to watch and that's without skipping a scene too. It's one of those few films that I can watch (the entire film) several times and never get tired of watching it. Not too mention, in this latest film adaptation of one of Jane Austen's most beloved novels, there are always new things I discovered on scenes I failed to noticed upon my first and previous viewings. This second film version of P&P was a gem. In my opinion, it was the best version I've seen from a

few P&P TV/Film adaptations I've seen (ie. 1995 and 1980 mini-series versions). One of the best things about this film was its beautiful scenery and cinematography. Every shot was visually stunning from the first scene to the last. The opening scene in Pride & Prejudice was beautifully shot and visually stunning. I love the colors of the sunrise. It's just lovely and so incredible to watch.

Lizzie walking and reading a book (I've heard on the DVD commentary by director Joe Wright that Lizzie was reading, "First Impressions," which was the first original title of P&P novel just before it was published in 1797 or something. Interesting eh?) Love the shot of Keira in character as Lizzie Bennet walking and reading her very own story. How ironic as Lizzie in the book loves to walk and read, hehe! The locations used in the film were just beautiful and makes me want to go and visit the English countryside 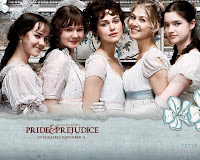 outside London. Another was the casting of actors and their ages. I thought it was perfect casting and this version definitely got the right cast and their ages esp. the Bennet sisters are similar to the book. Not too mention the casting for Elizabeth Bennet and Mr. Darcy were perfect.

Keira Knightley was Elizabeth Bennet & Matthew Macfadyen was Mr. Darcy. They have this undeniable on-screen chemistry and they sizzle on-screen whenever they appear in the same scene, opposite or next to each other. They owned the characters and in my opinion, they were simply perfect as Elizabeth & Darcy. Also, I thought this 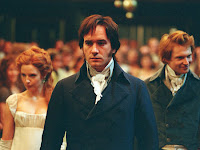 film was true to the original book, as it centers around Elizabeth Bennet's point of view, which it should be. The rest of the cast were just brilliant. The music and score were simply beautiful, memorable, and unforgettable to listen to.

They were just perfect in every scene. The costumes were exquisite and colorful. I thought the direction in this film was brilliant and Joe Wright was superb. I can't believe he didn't get an Oscar nomination for this film. Not too mention Dario Marianelli didn't even win for such a beautiful score for P&P. Such ashamed that he didn't win as I thought his P&P score and music he did for the soundtrack was his best work...at least in my opinion. Oh, well...he at least got nominated. Though he won for Atonement's score, instead. Still, P&P's music should've been the one that should've won him an Oscar. The stunning cinematography, though nominated and should've won...was also snubbed by Oscar. Oh, well, not that the Oscar picks the best films to nominate and win anyways. A lot of very good films often get ignored come awards season, that doesn't make them any less good than the ones that got noticed and won. P&P at least got nominated and made a lot of money with its Box-Office gross worldwide. So, what it lacks on Golden Globe and Oscar wins...gained lots of fans and B.O. gross/money for the film, which what's important and count the most than winning countless awards.

To answer the rest of the questions for this movie....

2) What did you think of the movie?
I thought, overall this film was superb. Two thumbs way uP! I love everything about it. It's simply one of the best films I've seen in 2005...and one of my all-time favorite films to watch.

3) What would you rate this movie out of ten? Would you see it again?
A perfect 10 out of 10 (of course...obviously, lol). "Yes, a thousand times, YES!" I've seen this movie several times now that I can't even remember how many times anymore, lol.

5) Favorite character(s) and why?
The main lead/protagonist/couple: Elizabeth Bennet and Mr. Darcy because they are what makes the story and this film worth watching. I love their banter, flirting, sarcasm, and their in denial love and affection for each other.

6) Least Favorite character(s) and why?
The 3 antagonists characters of this film (of course): Mr. Wickham, Caroline Bingley, and Lady Catherine because they were so good at being bad, lol.

7) Most Favorite scene(s)?
The second Proposal scene when Darcy proposed and pour out his feelings to Lizzie and she finally took his hand, kissed it, and accepted his marriage proposal.

8) Least favorite scene(s)?
It was the scene when Lydia and Wickham were leaving Longbourn and she was waving goodbye to her family. Wickham forced her to sit down the carriage, which I thought was rude of him to do so.