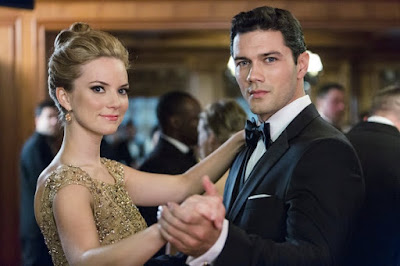 Great news for fans of Unleashing Mr. Darcy (starring Ryan Paevey as Donovan Darcy, Cindy Busby as Elizabeth Scott, and Frances Fisher as Violet Darcy), the sequel is officially a go and titled Marrying Mr. Darcy (with the same main cast returning)! Filming begins today (until April 19th) in Vancouver, with a premiere date of June 2nd, on Hallmark Channel (as part of either Summer Weddings or Summer nights...I’m thinking it’s the former). The first movie was a ratings hit for Hallmark over two years ago (January 23, 2016), which was part of their WinterFest season.

Well I guess the cat is out of the bag! Did anyone see the promo for #MarryingMrDarcy today on @hallmarkchannel ?? Airing June 2!!!!!!!! Before anyone asks, no there is not a book. But I wrote the story treatment for the movie. xoxo 🐶🐶 #UnleashingMrDarcy (@TeriWilsonauthr) March 22, 2018

Thanks for the love and support about Marrying Mr Darcy! @hallmarkchannel #MarryingMrDarcy so excited! #Hallmark (@cindy_busby) March 23, 2018