Many thanks (as always) to P&P (2010) film's director Bonnie Mae for sending me more of her cast photo shoots below. :) 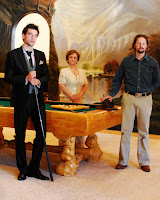 
(click on Caleb & Maia's image below to enter the photo album!)